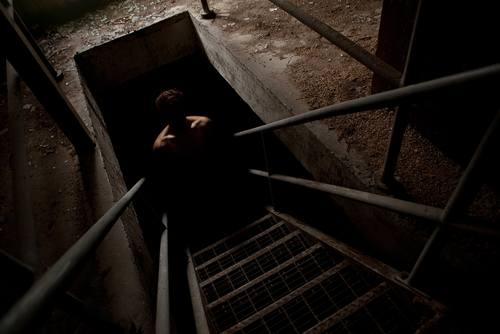 A concept photo of a haunted basement. Latoya Ammons believes the basement of her Gary, Ind., home was the point from which demons who possessed her and her family were emanating. Some police reports show evidence to support the claim. (Shutterstock*)
Beyond Science

Latoya Ammons of Indianapolis and her three children have a terrifying story of possession and exorcism witnessed and affirmed by some police and health-care professionals.

Police Captain Charles Austin of Gary, Ind., told the Indy Star he thought Ammons was lying at first, but after visiting her home, “I am a believer.”

Department of Child Services (DCS) case manager Valerie Washington and registered nurse Willie Lee Walker both reported that they watched Ammons’s 9-year-old son walk smoothly backwards up a wall to the ceiling, then land on his feet on the floor. In a report obtained by the Indy Star, Washington said the boy had a “weird grin” at the time. Washington and Walker ran out of the room.

Washington witnessed the youngest child, 7, speaking in a demonic voice that didn’t seem his own before his eyes rolled back in his head and he passed out. He growled and bared his teeth at her.

Ammons said she saw her 12-year-old daughter levitating in her bedroom.

The events began shortly after the family moved into a rental home in Gary, Ind. Recorders used in the home during the investigations wouldn’t work. Ammons has said she believes the house was full of demons.

Her 7-year-old had said he was talking to a little boy only he could see who was telling him what it was like to be killed.

The Ammons family physician, Dr. Geoffrey Onyeukwu, told The Star it was “bizarre.”

“Twenty years, and I’ve never heard anything like that in my life,” he said. “I was scared myself when I walked into the room.”

Police found an oily substance on the window blinds; they wiped it off and it returned. They couldn’t figure out where it came from. In the middle of winter, Ammons said, a swarm of flies appeared near the door of the home.

The previous tenant had not reported any strange occurrences. While some medical staff who examined the family were convinced by what they saw, some remained skeptical.

The family underwent multiple exorcisms and finally left the house. They now are doing well and returning to normal life after the ordeal.

*Image of haunted basement via Shutterstock