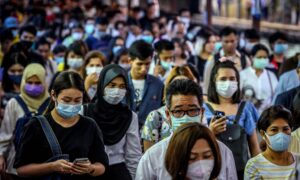 A notorious forced demolition group run by the Chinese Communist Party (CCP) authorities was involved in the death of an elderly woman in southern China. Pan Xiuzhen, the 86-year-old victim, lived in Bantang village, Guangxi Province. Eyewitnesses claimed she was beaten by the local demolition workers, and later died in a hospital on June 18.

Shortly after Pan died, Liuzhou Public Security (the local police) forcibly took away her body, so that Pan’s family could not gather any evidence to prove that Pan’s death was a result of a severe beating. Pan’s niece told The Epoch Times that Pan was in good health before she died.

The following video was filmed by Pan’s family in front of the hospital after she passed away.