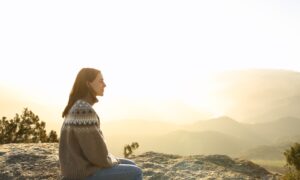 Zou, who is wheelchair bound and cannot talk, was accused of causing “intentional injury” to two of a group that attacked his mother Zou Houzhen, in an attempt to force her to vacate her apartment.

Locals were incensed by the charges, particularly given the sensitive background circumstances: forced evictions inspire deep resentment toward the authorities on the part of the Chinese masses.

While around 300 had gathered, including victims of forced eviction and demolition from elsewhere in the city, only 100 were eventually allowed, in according to Zhang Chunxia, a petitioner.

The others kept vigil outside the court house, sharing their doubts about the alleged death and injury that Zou Bin was accused of affecting as two men broke into his mother’s home attempting to forcibly evict the two of them.

Another petitioner who was in the hearing said Zou Bin had been under detention for over 7 months. His legs bound with blankets, Zou Bin was carried to court by two police officers. Since Zou lost the ability to talk from an illness, he used body language to communicate, nodding or waving the hand during the court hearing.

Zou Bin’s lawyer, Mr. Liu, said that there is not enough evidence to support the charges against him. No verdict was reached on the 15th.

Zou Houzhen said that the Wuhan Procuratorate euphemized “eviction” and “forced demolition” with “relocating,” and “renting,” apparently because they did not want to associate the case with forced eviction.

The murder was said to have taken place in the evening of Aug. 1, 2010. Over 30 people gathered in front of the apartment building where Zou Houzhen lived. Five got into the building claiming they were helping a family on the 2nd floor to move. But, all of them went straight to the third floor apartment where Zou lived. Zou Houzhen and Zou Bin who were inside, refused to open the door.

When Zou Houzhen came out of her home, she was beaten to the ground and suffered a wrist injury. The 35 year old Zou Bin heard his mother’s cry for help, came out and got into a fight with those who had gathered. The police claim that a fruit knife, found inside Zou Houzhen’s home, was used by Zou Bin to kill one and injure another.

Protesting Eviction With Banners and Propane

On the same time day in Qiaokou District, Wuhan, nearly a thousand victims of forced eviction protested outside a Xinhua Bookstore, some holding signboards, some carrying propane tanks on bikes and wheelbarrows, in an effort to ward off attacks from the police.

But it was the propane tanks, which could be combined with flame to deadly effect, that were most efficacious in warding off the special police forces from Wuhan Public Security Bureau. The protesters held those police at bay for at least three hours.

Ruan Chengfa was displeased, accusing the police of not doing enough to “protect the interests of the Party.”

The forced eviction was then carried out, with no official documentation. Since then, conflicts between Wusheng Street residents and developers have been nonstop.