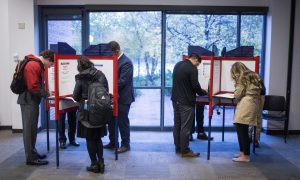 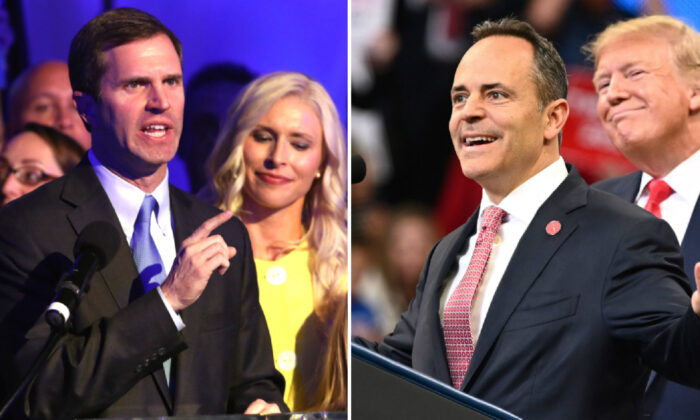 In Kentucky, with 100 percent of precincts reporting, Beshear took a lead of 4,658 votes out of more than 1.4 million counted—a margin of 0.3 percentage points.

At a rally on Tuesday night, Beshear declared victory over Bevin at 49.2 percent to 48.9 percent, but Bevin refused to concede. Bevin told his supporters Tuesday night that the process needs to be followed in such a close race—an apparent reference to the process of checking to ensure ballots were reported and added correctly.

There is no mandatory recount law in Kentucky. Bevin may request counties to recanvass their results, which is not a recount, but rather a check of the vote count to ensure the results were added correctly. Bevin would need to seek and win a court’s approval for a recount, the process for which would be dictated by the court.

Trump’s 2020 campaign manager, Brad Parscale, said in a statement that the president “just about dragged Gov. Matt Bevin across the finish line” while helping Republicans win several other statewide races.

His full statement reads: “President Trump’s rally helped five of six Kentucky Republicans win clear statewide victories, including Attorney General-elect Daniel Cameron, who will be the first black A.G. in Kentucky history and the first Republican to hold the office since 1948. The President just about dragged Gov. Matt Bevin across the finish line, helping him run stronger than expected in what turned into a very close race at the end. A final outcome remains to be seen.”

Earlier, on Twitter Tuesday afternoon, Bevin noted that Kentucky has more registered Democrats and Republicans and noted that he is only the fourth Republican governor elected in the state since the 1920s.

Meanwhile, Daniel Cameron (R) will succeed to become attorney general, after having defeated Gregory Stumbo (D), taking about 60 percent of the vote. He is set to become Kentucky’s first Black and first Republican since 1948 in the role.

The results come as election polls also closed in another three states: another off-year governor’s race in Mississippi, and state legislative elections in Virginia and New Jersey.

“I want to be the governor for all Mississippians and I’m going to work hard every day to do that,” Reeves told The Associated Press after his victory.

Trump had appeared in Mississippi on Friday to campaign for Reeves.

The current governor, Phil Bryant (R), was not able to seek re-election because of term limits.

Reeves had defeated former state Supreme Court Chief Justice William Waller (R) in a runoff election on Aug. 27 after no candidate won a majority of the vote in the Republican primary. Hood had won the Democratic primary nomination over seven other candidates.

The legislative wins likely mean that Democrats can pass a raft of bills that Republicans had resisted, including new gun limits. Democrats will also control the redistricting process in 2021 when lawmakers draw new voting lines for state and congressional elections after next year’s U.S. Census.

In New Jersey, Democrats were expected to maintain their stranglehold on the state’s general assembly, the legislature’s lower chamber.

The 2019 election season continues, with an upcoming election coming to Louisiana on Nov. 16 where Gov. John Bel Edwards (D) is being challenged by Eddie Rispone (R). Trump is expected to visit Louisiana in support of Rispone ahead of the election.