US Manufacturing Exodus From China Gets Underway
0 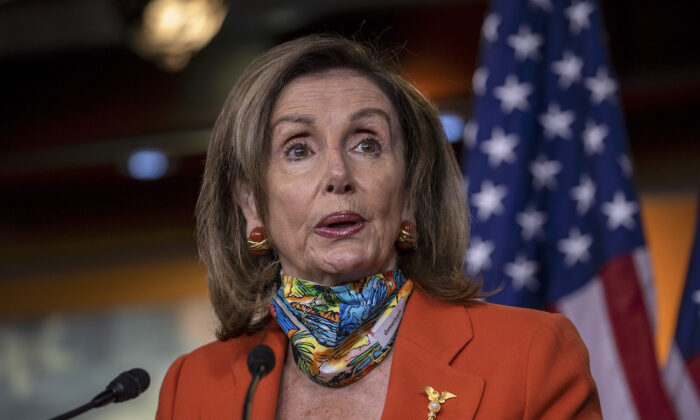 Speaker of the House, Nancy Pelosi (D-Calif.) urged President Donald Trump to invoke the Defense Production Act (DPA) to ensure there is enough personal protection equipment (PPE) and testing to open schools safely in the fall.

The Speaker pushed for the DPA during a press conference on Wednesday to highlight the provisions in the Heroes Act which were passed by House Democrats in May but stalled in the Senate.

“What we need very strongly, is for the President to implement Defense Production Act immediately to address the need for the testing equipment and equipment,” Pelosi said. “We need to have a separation in schools, sanitation, cleaning, schools, again and again, is money, but it also needs equipment to get the job done.”

According to the Council on Foreign Relations, the DPA allows the President, mainly through executive order, to direct private companies to prioritize orders from the federal government. The president can also “allocate materials, services, and facilities” for national defense purposes, and take actions to restrict the hoarding of needed supplies.

The Democrats’ Heroes Act allocated over $100 billion for schools and a separate $75 billion for testing.

Pelosi reiterated, “The resources are designated in a very appropriate way (referring to the Heroes Act). But we need the equipment and we can’t have it unless the President implements the Defense Production Act.”

Earlier in the year, President Trump faced pressure to get more ventilators during the upsurge in pandemic related deaths. In April he invoked the DPA to clear the supply-chain issues encountered in the manufacturing of ventilators and to ensure the production of N95 face masks.

Ranking member of the Senate Judiciary Committee, Diane Feinstein (D-Calif.) also urged the President to implement the DPA to enable Americans to have enough PPE to open schools and get back to work safely.

“I write to ask that you direct your administration to fully implement the Defense Production Act in order to address supply chain problems and increase the production and distribution of testing supplies, medical equipment, and personal protective equipment,” wrote Feinstein (pdf).

“I share your goal of reopening the economy as safely and as quickly as possible, but we must ensure that we do so in such a way that employers, workers, and consumers can be confident that their health is not being put at risk,” added Feinstein.