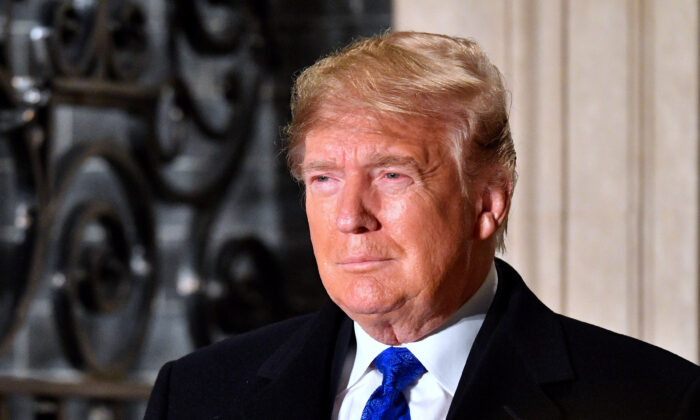 Trump “solicited and pressured Ukraine to interfere in our 2020 election,” Nadler claimed.

Nadler said Trump “engaged in unprecedented, categorical, and indiscriminate defiance of the impeachment inquiry,” prompting the obstruction of Congress article.

“No one, not even the president, is above the law,” he said.

The announcement came more than two months after House Speaker Nancy Pelosi (D-Calif.) announced an impeachment inquiry against Trump. She said it was triggered by a complaint filed by an anonymous person that focused on Trump’s phone call in July with Ukrainian President Volodymyr Zelensky. Trump and Zelensky have both denied the allegations.

Trump’s White House released a transcript of the call the same week.

Democrats say Trump abused the power of his office by reviewing congressionally approved aid for Ukraine. Trump has said he reviewed the aid because of widespread concerns about corruption in Ukraine, and his administration noted it was ultimately sent out on time.

Democrats have sought to connect the hold on aid with Trump’s request to Zelensky to “look into” allegations of corruption surrounding former Vice President Joe Biden and Biden’s son Hunter Biden, who worked for the Ukrainian energy firm Burisma from 2014 to 2019.

Because Joe Biden is running for the Democratic presidential nomination, the party has claimed Trump’s request amounted to an attempt to interfere in the 2020 election.

Both U.S. and Ukrainian officials have said Ukraine wasn’t aware of the hold on the aid until August, weeks after the phone call took place.

Democrats have also accused Trump of “bribery” but left that allegation out of the articles of impeachment.

Rep. Jamie Raskin (D-Md.) told reporters late Dec. 9 that the impeachment inquiry uncovered two patterns of misconduct by Trump, Reuters reported: “Bringing in foreign governments into our politics in order to corrupt our elections” and “working to cover up this kind of misconduct by blockading witnesses, withholding evidence, and trying to stop people from testifying.”

Trump has denied wrongdoing, asserting it is his duty to probe corruption. He has pointed to statements Joe Biden has made in the past, including bragging in 2018 that while in office he threatened to withhold $1 billion in aid from Ukraine unless a prosecutor there was fired. That prosecutor, Viktor Shokin, was probing Hunter Biden’s employer, Burisma, at the time.

“Hardworking Americans know this sham is simply the dems weaponizing impeachment to try & undermine @realDonaldTrump, who has done nothing but fulfill the promises he ran on & fight for our country. Their behavior is shameful, but this will only serve to further unify our party,” White House press secretary Stephanie Grisham wrote on Twitter on Dec. 10.

To Impeach a President who has proven through results, including producing perhaps the strongest economy in our country’s history, to have one of the most successful presidencies ever, and most importantly, who has done NOTHING wrong, is sheer Political Madness! #2020Election

Trump wrote on Twitter: “To Impeach a President who has proven through results, including producing perhaps the strongest economy in our country’s history, to have one of the most successful presidencies ever, and most importantly, who has done NOTHING wrong, is sheer Political Madness!”

A majority vote is required in the House to impeach Trump. Democrats currently hold a 233–197 majority.

If the House approves impeachment, a trial will be held in the Senate, where Republicans currently hold a 53–47 majority.

A vote to convict a president, or remove him from office, requires the concurrence of two-thirds of the Senate. No president in the history of the country has been impeached and removed from office. The last president to be impeached, President Bill Clinton, was acquitted by the Senate.