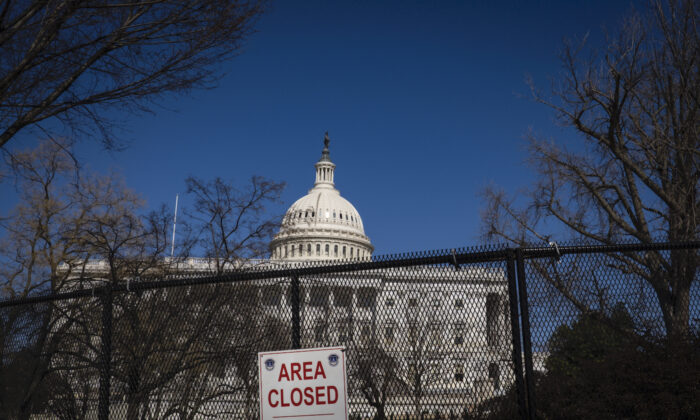 Fences and barriers surround the U.S. Capitol after being reinstalled ahead of President Joe Biden's State of the Union Address before a Joint Session of Congress on Feb. 27, 2022, in Washington, D.C. (Pete Marovich/Getty Images)
Cancel Culture

Two left-wing groups are trying to disqualify two pro-Trump Arizona congressmen and one Arizona state representative, all Republicans, as candidates in approaching elections, for allegedly participating in a supposed insurrection against the U.S. government by supporting the former president’s reelection bid.

This alleged participation supposedly culminated in the Jan. 6, 2021, security breach at the U.S. Capitol, in which supporters of President Donald Trump delayed the congressional certification of the 2020 presidential election results for several hours. Democrats and a handful of Republicans characterize the disturbance as an insurrection or coup attempt aimed at overthrowing the U.S. government, although that claim has been adamantly denied by Trump and his supporters.

Those trying to oust the three officeholders say their actions triggered the rarely invoked Disqualification Clause in Section 3 of the 14th Amendment, which was enacted in the wake of the Civil War to keep former Confederates out of Congress and state governments.

Lawsuits have been filed in the Superior Court of Arizona in Maricopa County targeting U.S. Reps. Paul Gosar and Andy Biggs, who are seeking reelection, as well as state Rep. Mark Finchem, who is running for Arizona secretary of state, according to the Austin, Texas-based Free Speech for People on April 7.

Gosar says the lawsuit against him is a waste of time.

“The Democrats have filed a frivolous suit to keep me off the ballot, falsely claiming I am an insurrectionist,” Gosar told The Epoch Times by email.

“Since 2010, I have beaten, at the ballot box, every Democrat I have faced. This is the true reason they want me off the ballot.”

Gosar and Biggs are known for their efforts in Congress to expose Chinese Communist Party infiltration and meddling in America’s domestic politics. Finchem is seeking higher office on an election integrity platform.

According to the group Free Speech for People and Our Revolution, a left-wing organization that grew out of admitted socialist Sen. Bernie Sanders’s 2016 presidential campaign, the two groups “are co-leading a national campaign to ensure that election officials across the country follow the mandate of Section Three of the Fourteenth Amendment and bar elected officials who engaged in the insurrection, including former President Donald Trump, from appearing on any future ballot.”

According to the complaint (pdf) filed against Gosar, the events of Jan. 6, 2021, in which he “engaged, amounted to an insurrection or a rebellion under Section Three: a violent, coordinated effort to storm the Capitol to prevent the Vice President of the United States and the United States Congress from fulfilling their constitutional roles by certifying President Biden’s victory, and to illegally extend then-President Trump’s tenure in office, including by illegally introducing illegitimate electors as ‘alternate slates’ for Congress to vote on.”

Gosar exercising his right to free speech somehow crossed the line, the complaint claims. Gosar’s encouragement of people to attend the rally on the National Mall that took place before the security breach at the Capitol “led directly, intentionally, and foreseeably to the insurrectionists’ violent assault on the Capitol.” Gosar’s statements supporting the proposed rejection of electoral votes constitute “efforts to intimidate Congress and the Vice President” and “to subvert the essential constitutional function of an orderly and peaceful transition of power.”

Gosar, the complaint states, helped plan the attack on Jan. 6, “or, alternatively, [was involved in] the planning of the pre-attack demonstration and/or march on the Capitol with the advance knowledge that it was substantially likely to lead to the attack, and otherwise voluntarily aided the insurrection.”

The allegations in the legal complaints against Biggs (pdf) and Finchem (pdf) are basically the same as those in the Gosar complaint.

The Epoch Times reached out to Biggs and Finchem for comment but didn’t receive a reply by press time.

Ron Fein, legal director of Free Speech for People, didn’t respond by press time to a request for comment on the three challenge lawsuits.