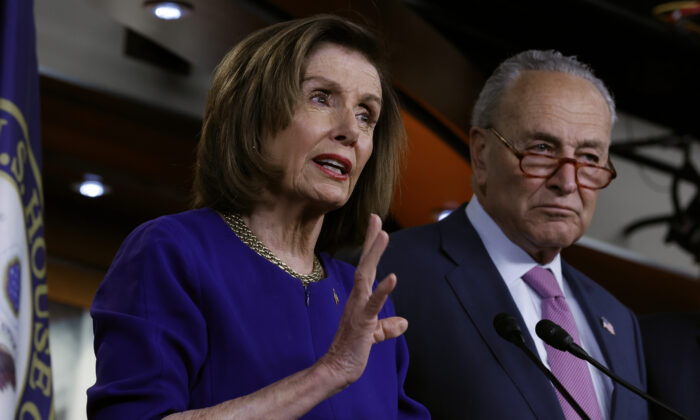 Proposals for Democrats’ omnibus spending bill to fund the government through 2023 would grant millions to left-wing organizations and institutions.

Every year, Congress must pass legislation to set spending levels. Failure to do so can result in a government shutdown, an outcome that costs the economy millions.

To avert shutdowns, lawmakers have two options: pass a so-called “continuing resolution,” (CR), which carries over spending levels set out in the previous year’s spending package, or to pass a new omnibus spending package.

Often, these omnibus bills are used as vehicles for lawmakers to allocate taxpayer funds to causes, issues, and organizations they consider important. Democrats’ proposal for the fiscal year (FY) 2023 budget is no different.

Democrats’ proposals for this year’s spending bills include millions of dollars in earmarks for left-wing groups and causes on the taxpayer’s dime, analysis by the Heritage Foundation found.

Organizations focused on racial, sexual, and gender issues stand to win big from the appropriations bill if passed.

For instance, the bill would grant $1 million to “Zora’s House,” an Ohio-based nonprofit that describes itself as “a sanctuary for women and gender-expansive people of color to dream, connect, and create; to shine bright and inspire change.”

In the same strain, Zora’s House calls itself “A community for women and non-binary people of color committed to transforming themselves and the world around them.”

Even more is granted to the “American LGBTQ+ Museum,” a New York City museum—$3 million.

The so-called museum, while it has plans to open physical locations at an unspecified future date, currently operates entirely online.

“In the years to come, our plan is to create a physical space in New York City—one that is vibrant and welcoming, both visually and cognitively, for the entire LGBTQ+ community,” the organization wrote in its first blog post on its website.

According to its mission statement, “The American LGBTQ+ Museum preserves, investigates, and celebrates the dynamic histories and cultures of lesbian, gay, bisexual, transgender, and queer people, as well as those of the emergent and adjacent identities among our communities. Using exhibitions and programs, we seek to advance LGBTQ+ equality through the lens of social justice movements, including, but not limited to, race, gender, class, immigration, and disability.”

In a line reminiscent of the rhetoric of Karl Marx and his adherents, the museum writes, “We envision a world in which all people work toward and experience the joy of liberation.”

The bill would grant another $477,000 to the “Equity Institute,” a Rhode Island-based nonprofit dedicated to “develop[ing] and implement[ing] innovative solutions for building more diverse, equitable, and inclusive learning and professional environments.”

“We envision an antiracist education system that recognizes identity and human connection as central to the process of teaching and learning where all young people build the knowledge and skills they need to thrive in the world,” the group writes in its mission statement.

Specifically, the group “[works] directly with schools, organizations, and communities to develop and implement antiracist strategies to advance equitable learning outcomes for all students.”

In an emailed press release, the Heritage Foundation dismissed the organization as one formed to “indoctrinate teachers” with left-wing ideology.

The appropriations don’t end there.

An additional $2.4 million would be granted to San Diego Community College. Half of this funding is set to go to “LGBTQIA+ Pride Centers” while the other half is appropriated for “Dreamer Resource Centers.”

“Dreamer” is a term used to refer to those protected by President Barack Obama’s controversial Deferred Action for Childhood Arrivals, or DACA program. Though the measure remains in place, “dreamers” are legally considered illegal aliens, and Republicans have long sought to end the program, undertaken via executive action rather than through Congress.

The $1.2 million granted for the “Dreamer Resource Centers,” then, would mean using taxpayer dollars to fund organizations helping those in contravention of federal law.

Heritage also pointed to several “silly and absurd” earmarks included in the bill: $2 million for the “Great Blacks in Wax” Museum in Baltimore, a $1.1 million solar array in Kirkland, Washington—one of the least sunny places in the country—and $1.6 million for the Leahy Center for Lake Champlain, named after outgoing Senate President Pro Tempore Patrick Leahy (D-Vt.), who requested the earmark himself.

Additionally, Democrats’ spending bill would grant $3 million for water infrastructure in a part of Alaska that is so sparsely populated that the $3 million appropriation is the equivalent of  $44,000 per resident.

David Ditch, a senior policy analyst for Heritage, discussed the proposed earmarks in an interview with The Epoch Times, and he emphasized that these are not merely cherry-picked radical proposals, but are instead proposals that have already gotten the approval of the House Appropriations Committee.

“I want to specify that there are a larger number of proposals or requests that are made by members,” Ditch said. “These are the ones that have made it through sort of the cutting room floor and have been approved by the Appropriations Committee.”

Ditch noted that while the bill would grant millions to left-wing causes, there are no equivalent appropriations for “blatantly conservative groups.”

In contrast to the appropriations granted to groups pushing overtly left-wing ideology, Ditch said, “I do not see funds being dedicated to just blatantly conservative activist groups.”

In part, Ditch said that this is attributable to the lack of similar activist work by conservative groups.

“There’s a network of left wing nonprofits doing a variety of things across the country, in many cases relating to the LGBT community, in some cases, relating to sort of race-based or race-focused activism,” Ditch said.

“There isn’t really a parallel on the right,” he added.

Many of the issues funded by Democrats’ proposals, including issues related to race and sexuality, remain highly controversial among members of the American public. Ditch argued that these issues are “corrosive,” and should be left out of spending bills.

The appropriations set out in the bill, Ditch mused, “is Democrats’ way of saying ‘regardless of whether you agree with these groups and their mission, we’re going to force the American public to fund them.'”

While Ditch has called for earmarks to be done away with entirely, he conceded that not all earmarks are created equal.

“It’s one thing to have earmarks for affordable housing in different parts of the country, or interest rates, or different types of infrastructure,” Ditch said. “These are things [that] have lots and lots of historical precedent.”

But in recent years, Ditch said, left-wing interests have increasingly taken advantage of earmarks to push overtly political goals on issues that are far from settled in the public conscience.

“I’m seeing more and more of an aggressive push to fund left left-wing groups that have a very clear political agenda or that are directly linked to the political and social agenda of the left,” Ditch said. “I think that type of funding isn’t just wasteful and inappropriate: it’s corrosive, frankly.”

Instead, Ditch said, “The federal government should focus on things with their real national priorities and things where there is a national consensus. Unfortunately, over the course of the last 100 years, there are more and more things that the federal government spends money on, where there’s absolutely not a consensus, and it’s part of why our politics have become so contentious.”

The fate of the omnibus package hinges largely on choices made by the U.S. Senate.

In the House, where Democrats still have the majority, it will be a breeze to pass the package. Speaker of the House Nancy Pelosi (D-Calif.) will only need the support of a simple majority to advance the package.

However, the Senate has different rules.

In the upper chamber, almost every single bill—with very few exceptions—must first overcome the 60-vote filibuster threshold. This vote, known as cloture, is necessary for a bill to move to the floor for a final simple majority vote.

Senate Minority Leader Mitch McConnell (R-Ky.), leader of the Senate GOP caucus, has indicated that he’s theoretically open to working with Democrats to pass an omnibus bill before the Dec. 16 deadline.

However, after bicameral opposition from within his party to any long-term spending deal—including Sens. Ted Cruz (R-Texas), Rick Scott (R-Fla.), Mike Lee (R-Utah), and Mike Braun (R-Ind.), as well as House Minority Leader Kevin McCarthy (R-Calif.), and Rep. Chip Roy (R-Texas)—McConnell is now indicating that a CR is looking more likely than an omnibus bill.

“We’re at a pretty significant impasse,” McConnell told reporters on Tuesday. “Time is ticking. We have not been able to agree on a top line yet, and I think it’s becoming increasingly likely that we might need to do a short-term CR into early next year.”

Either way, the clock is ticking for lawmakers to avert a government shutdown, which will begin after Dec. 16 if no compromise is struck.