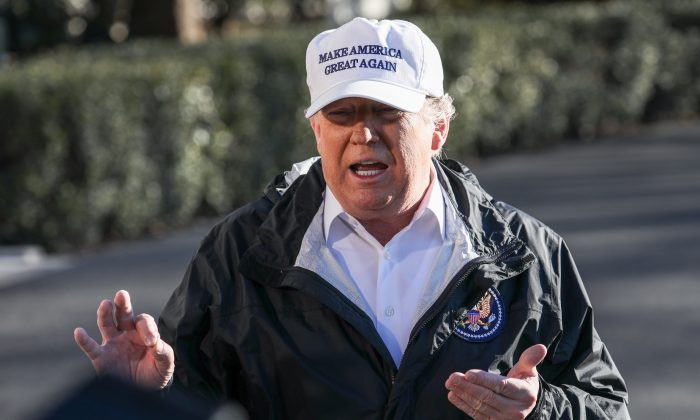 Democrat leaders refused to participate in a working lunch with President Donald Trump on Jan. 15, instead boycotting the meeting amid the ongoing partial government shutdown.

Trump and Democrat leaders are at an impasse over funding for the southern border wall, one of Trump’s main campaign promises. The president wants $5.7 billion for the wall included in appropriations to fund the government, but Democrat leader and Speaker of the House Nancy Pelosi (D-Calif.) said she would only give him $1.

“As Senator Schumer and Speaker Pelosi refuse to negotiate, President Donald J. Trump and his team are working hard to find solutions to solve the humanitarian and national security crisis at the border and reopen the government. The President has a proposal on the table that includes additional technology at ports of entry, allows minors from Central America to seek asylum in their home country, and physical barriers between ports of entry made of steel instead of concrete,” White House press secretary Sarah Sanders said in a statement sent to media outlets.

“Today, the President offered both Democrats and Republicans the chance to meet for lunch at the White House. Unfortunately, no Democrats will attend. The President looks forward to having a working lunch with House Republicans to solve the border crisis and reopen the government. It’s time for the Democrats to come to the table and make a deal.”

Several of them said they received the invitations but declined to attend; Murphy cited a scheduling conflict.

“I have attended meetings with the president at the White House before, but a scheduling conflict prevented me from accepting this invitation. However, I continue to believe the Senate should pass and the President should sign the bills reopening government that the House already passed,” Murphy said in a statement, adding that she’d prefer the government re-open.

Correa’s office told The Hill that Correa wouldn’t talk to Trump unless the government was open.

“Congressman Correa welcomes the opportunity to talk with the president about border security, as soon as the government is reopened.”

A Democratic aide said that Pelosi left it up to rank-and-file members to decide whether to attend the meeting.

During a closed-door meeting on Monday night, she told other Democrat leaders that members should go and “see what we’ve been dealing with.”

“And they’ll want to make a citizen’s arrest,” she said, the aide told ABC.

While some outlets portray the shutdown as all-consuming, it affects about 25 percent of the government and 15 percent of the workforce, or around 800,000 workers. Lawmakers from both parties passed legislation that would fund back pay for the current shutdown and future shutdowns. Trump was expected to sign the legislation.