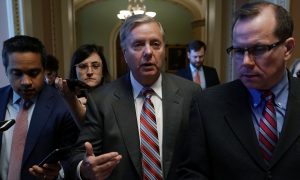 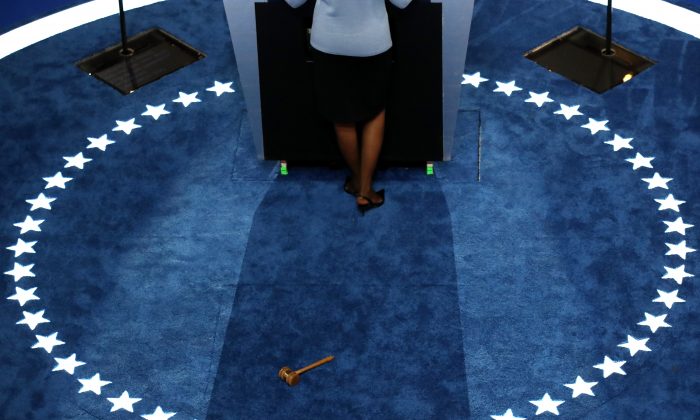 The gavel used to call to order lies on the ground after Baltimore Mayor Stephanie Rawlings-Blake opened the first day of the Democratic National Convention at the Wells Fargo Center, Jul. 25, 2016 in Philadelphia, Pa.
Politics

Democrats omitted “so help me God” from the swearing-in of people testifying before a committee on Feb. 28, sparking criticism from a Republican on the committee.

Video footage from the start of the House Judiciary Subcommittee on the Constitution and Civil Rights & Liberties shows Rep. Steve Cohen (D-Tenn.) starting the hearing by asking three people set to testify to be sworn-in.

“Do you swear or affirm under penalty of perjury that the testimony that you’re about to give is true and correct to the best of your knowledge, information, and belief?”

Cohen asked the trio. They all said yes.

Johnson shared the video clip on Twitter on March 1. “I will not give up on this issue. Stay tuned,” he said.

I will not give up on this issue. Stay tuned. pic.twitter.com/dwvCbNGAYJ

Cohen prepared to move on but Rep. Mike Johnson (R-La.) interjected, saying, “I think we left out ‘so help me God.'”

“We did,” admitted Cohen.

Johnson, 47, asked the witnesses to reaffirm the oath with the traditional phrase for the record, to which Cohen responded, “No.”

Johnson responded: “Well it goes back to our founding history, it’s been part of our tradition for more than two centuries and I don’t know that we should abandon it now.”

“Could I ask the witnesses if they would choose to use the phrase?” he asked.

Before the witnesses could respond, Rep. Jerrold Nadler (D-N.Y.) asked to speak. He then said: “If any witness objects he should not be asked to identify himself. We do not have religious tests for office or for anything else.”

“And we should let it go with that,” he added.

Cohen then moved the hearing on without any of the witnesses having taken the oath with the phrase “so help me God included.”

Johnson on Feb. 6 shared another clip that showed Nadler asking witnesses to take the oath while leaving out “so help me God” at a House Committee on Natural Resources hearing earlier in the month. Johnson objected and Nadler repeated the oath with the phrase.

After Dems’ failed proposal to strip “So help me God” from the witness oath in the Natural Resources Committee last week, I noticed the clause was being left out at other committees.

It happened today, & I made sure to quickly correct the record. #OneNationUnderGod @JudiciaryGOP pic.twitter.com/j2QWeKW5hz

The instances came after a draft of committee rules showed that Democrats on the Committee on Natural Resources were planning to remove the reference to God in the oath.

The draft (pdf) showed the words “so help you God” in red brackets, indicating that the words will be removed if the draft rules are approved. Instead, the Democrats plan to add the words “under penalty of law” to the oath.

A top Republican congresswoman characterized the edits to the oath as indicative of a hard left shift in the Democratic Party.

“It is incredible, but not surprising, that the Democrats would try to remove God from committee proceedings in one of their first acts in the majority,” House Republican Conference Chairwoman Liz Cheney (R-Wyo.) told Fox News.

“They really have become the party of Karl Marx,” she said.

A number of Democrats openly ran as socialists during the 2018 midterms. While most lost, Alexandria Ocasio-Cortez, a card-carrying member of the Democratic Socialists of America, won a congressional race in New York.