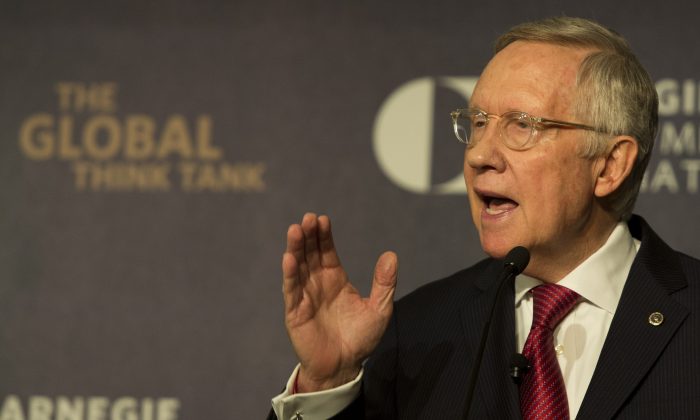 Senate Minority Leader Harry Reid (D-NV) gestures as he speaks about the Iran nuclear deal at the Carnegie Endowment for International Peace in Washington, DC on September 8, 2015. (Andrew Caballero-Reynolds/AFP/Getty Images)
US

WASHINGTON—Democrats clinched the crucial Senate votes Tuesday to block passage of a disapproval resolution against the Iran nuclear accord, an outcome that would be a major win for President Barack Obama against united Republican opposition.

But supporters of the deal stopped short of declaring victory amid the fast-paced developments as lawmakers returned to Washington from their five-week summer recess. That was because it remained uncertain whether all 41 Democratic and independent senators now on record in favor of the deal would also support a filibuster to block a final vote on the disapproval resolution.

Still, the complicated machinery of Congress was turning in favor of the president on his top foreign policy priority, despite GOP control of both the House and the Senate. Already supporters of the deal have the votes in hand to uphold Obama’s veto of a disapproval resolution, should that become necessary. Blocking the disapproval resolution with a filibuster, while ideal from the White House view because it would spare Obama from a veto fight, would not change the ultimate outcome.

“This agreement will stand,” Senate Minority Leader Harry Reid (D-Nev.) said Tuesday morning at the Carnegie Endowment for International Peace. “America will uphold its commitment and we will seize this opportunity to stop Iran from getting a nuclear weapon.”

White House Press Secretary Josh Earnest made clear the administration’s preference for the Senate to block the disapproval resolution before it could reach Obama’s desk.

“We certainly would expect that those members of Congress who support the agreement to take the necessary steps in Congress to prevent Congress from undermining the agreement,” he told reporters.

As the day began Tuesday Sen. Joe Manchin of West Virginia announced his opposition to the deal, a surprise “no” vote from a moderate Democrat who had sounded like he favored the pact aimed at curbing Iran’s nuclear ambitions.

But that setback for supporters was erased within the hour as three Democrats seen as potential “no” votes on the deal all announced they would support it. Those senators were Richard Blumenthal of Connecticut, Ron Wyden of Oregon and Gary Peters of Michigan.

“The fundamental question for me is what this agreement means for the prospects of Iran getting a nuclear bomb,” Wyden said. “This agreement with the duplicitous and untrustworthy Iranian regime falls short of what I had envisioned, however, I have decided the alternatives are even more dangerous.”

The agreement struck by Iran, the US and five other world powers in July will provide Iran hundreds of billions of dollars in relief.

In the agreement struck by Iran, the U.S. and five other world powers in July will provide Iran hundreds of billions of dollars in relief from international sanctions in exchange for a decade of constraints on the country’s nuclear program.

Republicans who control the House and Senate strongly oppose the pact, saying it makes dangerous concessions to Iran, and they hope to push through a resolution of disapproval this week.

Leaders of Israel have been strongly lobbying against the deal they said could empower Iran, but had succeeded in winning over only three Senate Democrats, albeit all of them prominent figures—Chuck Schumer of New York, Bob Menendez of New Jersey, and Ben Cardin of Maryland, the top Democrat on the Senate Foreign Relations Committee. Manchin added his name to that list Tuesday.

But the majority of Democrats have swung behind the president, and predictions that the issue would dominate discussion during Congress’s August recess never came to pass as political headlines were largely overtaken by Donald Trump’s presidential candidacy. The two topics will converge on Wednesday, though, when Trump joins Texas Sen. Ted Cruz for a rally to oppose the deal—the same day Hillary Rodham Clinton delivers a speech supporting it.

The deal aims to keep Iran at least a year away from being able to produce enough nuclear material for a weapon, before the restrictions ease after a decade. Iran is currently assessed to be only two to three months away from being able to enrich enough uranium for a bomb, though the Iranians insist they have no intention of producing a nuclear weapon.