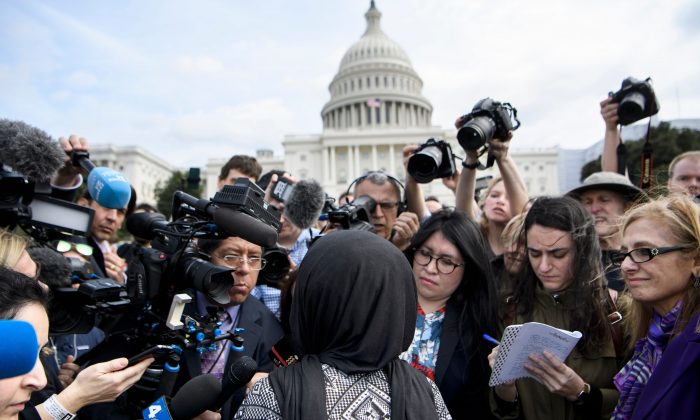 Rep. Ilhan Omar (D-MN) speaks to reporters during a youth climate rally on the west front of the Capitol in Washington on March 15, 2019. (BRENDAN SMIALOWSKI/AFP/Getty Images)
Politics

A number of prominent Democrats have condemned President Donald Trump for quoting Rep. Ilhan Omar’s (D-Minn.) dismissive description of the 9/11 terrorist attacks while at the same time, not disavowing the content of their colleague’s remarks.

On April 12, Trump posted a video that spliced news footage of 9/11 with a speech Omar gave last month where she described the attacks as “some people did something.”

The president and members of the Republican party have accused Omar of minimizing the 9/11 attacks, while Democrats have condemned Trump for allegedly inciting racism and violence. Omar made the comments at a Council on American-Islamic Relations (CAIR) fundraiser.

“For far too long we have lived with the discomfort of being a second-class citizen and, frankly, I’m tired of it, and every single Muslim in this country should be tired of it,” Omar’s full quote said. “CAIR was founded after 9/11 because they recognized that some people did something and that all of us were starting to lose access to our civil liberties.”

High-profile Democrats, including 2020 presidential contenders, were quick to come to Omar’s defense.

While House Speaker Nancy Pelosi (D-Calif.) said on April 13 that any discussion of 9/11 “must be done with reverence,” she appeared to ignore Omar’s apparently irreverent remarks on the subject, instead saying, “The President shouldn’t use the painful images of 9/11 for a political attack.”

The memory of 9/11 is sacred ground, and any discussion of it must be done with reverence. The President shouldn’t use the painful images of 9/11 for a political attack.

Democratic 2020 candidate Bernie Sanders (I-Vt.) struck a similar tone, when he said that Omar “won’t back down to Trump’s racism and hate, and neither will we. The disgusting and dangerous attacks against her must end.”

Ilhan Omar is a leader with strength and courage. She won’t back down to Trump’s racism and hate, and neither will we. The disgusting and dangerous attacks against her must end.

Rep. Alexandria Ocasio-Cortez (D-N.Y.) suggested that Trump put Omar’s life in danger while saying that any silence from her colleagues “is to be complicit” in his “dangerous targeting” of Omar. Joe Kennedy III (D-Mass.) made similar attacks against the commander in chief. House Judiciary Committee Chairman Jerrold Nadler (D-N.Y.) said he had no issue with how Omar characterized 9/11.

Members of Congress have a duty to respond to the President’s explicit attack today.@IlhanMN’s life is in danger. For our colleagues to be silent is to be complicit in the outright, dangerous targeting of a member of Congress.

We must speak out.

President Trump understands the weight his words carry. His tweet about Congresswoman Ilhan Omar puts her life & her family’s lives at risk. Our outrage should be nonpartisan. That it’s not will only give him license to continue to incite violence.

“For two years, this President has used the most powerful platform in the world to sow hate & division. He’s done it again,” presidential candidate Sen. Kamala Harris (D-Calif.) claimed on Twitter. “Putting the safety of a sitting member of Congress @IlhanMN at risk & vilifying a whole religion is beyond the pale. I’ll be blunt — we must defeat him.”

Sen. Elizabeth Warren (D-Mass.), another 2020 contender, also claimed that Trump was “inciting violence against a sitting Congresswoman—and an entire group of Americans based on their religion.” Like Ocasio-Cortez, she said on Twitter that any “elected leader who refuses to condemn it shares responsibility for it.”

In response, White House Press Secretary Sarah Sanders said on April 14 that the president wished “no ill will, and certainly not violence, towards anyone” adding that the president “absolutely and should be calling out the congresswoman for her, not only one time, but history, of anti-Semitic comments.”

Sanders also questioned why Democrats refused to condemn Omar for the comments Trump was highlighting.

“The bigger question is why aren’t Democrats doing the same thing? It’s absolutely abhorrent the comments that she continues to make and has made and they [Democrats] look the other way.”