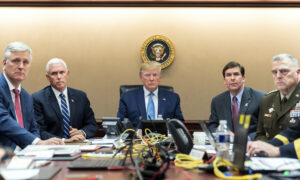 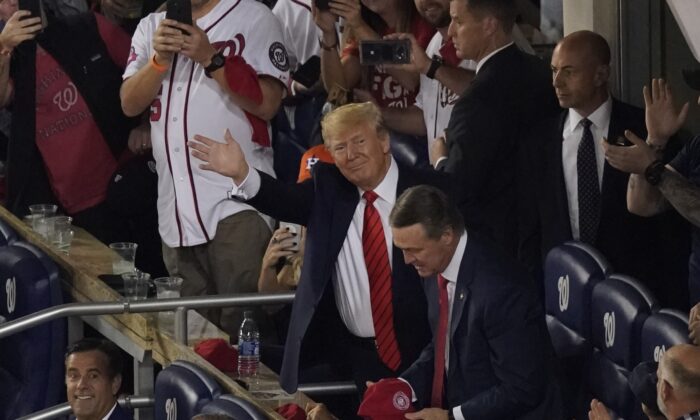 President Donald Trump is introduced during the third inning of Game 5 of the baseball World Series between the Houston Astros and the Washington Nationals in Washington on, Oct. 27, 2019. (AP Photo/Pablo Martinez Monsivais)
Politics

The president, First Lady Melania Trump, and some of Trump’s top Republican allies attended Game 5 of the series on Oct. 27 in Washington. The crowd booed Trump and chanted “lock him up.”

“Well, forgive me, I’m enough of a sort of traditionalist about our institutions that even at a time when there is a lot that our president does that I find disturbing, offensive, unconventional, I have a hard time with the idea of a crowd on a globally televised sporting event chanting ‘lock him up’ about our president,” Coons said on Monday during an appearance on CNN’s “New Day.”

“I frankly think the office of the president deserves respect, even when the actions of our president don’t,” Coons added.

At the same time, Coons said, he said he understood why “crowds in Washington would feel a lot of animus toward our president” and said it shows why he and his fellow senators should take the impeachment inquiry seriously.

Coons also said he hopes the “lock him up” chants don’t take place at Democratic rallies or the Democratic National Convention, saying he didn’t like how “lock her up” became a frequent refrain at Trump rallies during the 2016 election.

“It reminds me of things that happen in countries where rule of law is unknown or unestablished and sort of whipping up public furor on both sides I don’t think is constructive or helpful,” he said.

Rep. Steven Smith (R-Ga.) also decried the crowd’s treatment of Trump, but had a different take on it.

Smith said on Twitter that the boos and chants were “a badge of honor in a city run by snakes.”

A badge of honor in a city run by snakes. https://t.co/rL2zqXORWH

Trump’s son Donald Trump Jr., meanwhile, took to Twitter to criticize people who thought the president should have taken his teenage son, Barron, to the game, and his not doing so meant he wasn’t a “family man.”

“This is the dumbest take ever! I mean [expletive] stupid!!!” Trump Jr. wrote.

“Maybe he knew that the scumbag lobbyists and liberal elite in the 94% leftist swamp of DC would behave exactly as they did and therefore shielded a child from that kind of behavior. That’s great parenting moron!”