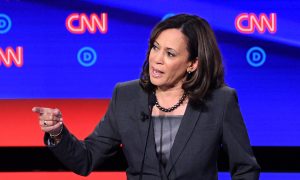 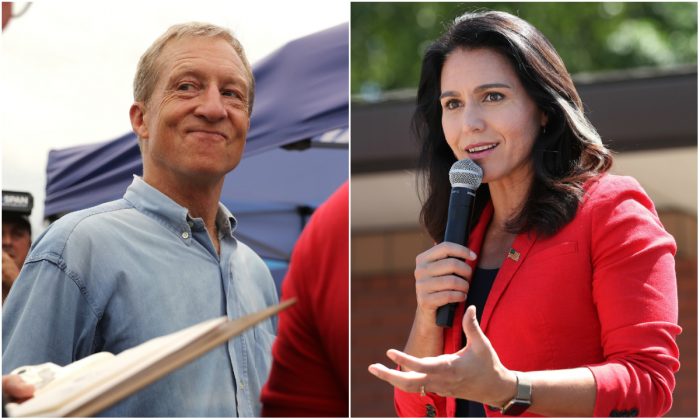 Democratic presidential candidates who appear to have missed qualifying for the next round of debates are striking out at the Democratic National Committee (DNC), accusing the group—which underwent turmoil when a leak showed it favored Hillary Clinton over Sen. Bernie Sanders (I-Vt.) in 2016—of unfairly winnowing the field as the campaign intensifies less than six months before the first primary.

Ten contenders have qualified for the debates, half the number that was allowed onstage in late July. The deadline to qualify is Aug. 28.

“These DNC debate rules have turned this primary into the ‘The Hunger Games,'” Montana Gov. Steve Bullock said on CNN. “Each step of this seems to be all about getting donors. I’ve made 10 trips to Iowa, I’ve been to New Hampshire a couple of times—I’m actually talking to voters, not just chasing $1 donors.”

Candidates needed donations from 130,000 donors and at least 2 percent support in four different polls, with only certain polling organizations and national polls or surveys in early primary states allowed.

The campaign of Rep. Tulsi Gabbard (D-Hawaii), who was on active duty during the past two weeks, took aim at the polling requirement. Gabbard’s campaign said she received support of 2 percent or more in 26 national and early state polls, but only two were counted.

“The Gabbard campaign is calling on the DNC to hold true to their promise and make adjustments to the process now to ensure transparency and fairness. Crucial decisions on debate qualifications that impact the right of the American people to have the opportunity to participate fully in the Democratic process should not be made in secret by party bosses,” the campaign said in a statement on Friday, adding that the committee should “revise their list of debate qualifying polls in light of numerous irregularities in the selection and timing of those polls, to ensure transparency and fairness.”

One of the polls that Gabbard scored enough in—at 3 percent—was the only live telephone poll conducted in New Hampshire, which holds the first primary in the nation. The survey, from The Boston Globe and Suffolk University, isn’t counted by the DNC.

“Many of the uncertified polls, including those conducted by highly reputable organizations such as The Economist and the Boston Globe, are ranked by Real Clear Politics and FiveThirtyEight as more accurate than some DNC ‘certified’ polls,” the campaign stated.

Billionaire Tom Steyer, who easily made the donor count after pouring in millions of his own money into advertisements, also had issues with the polling criteria. Steyer needs just one more poll to qualify.

.@TomSteyer campaign on the DNC polling criteria: “we are calling on the DNC to expand their polling criteria to include more qualifying polling, including at least one poll in Nevada before the deadline next week.” pic.twitter.com/eobSPh2quw

Steyer’s campaign said the committee should “expand their polling criteria to include more qualifying polling, including at least one poll in Nevada before the deadline next week.”

“As a party, we want to ensure the will of the voters is respected,” the campaign stated.

“We’re rewarding celebrity candidates with millions of Twitter followers, billionaires who buy their way onto the debate stage, and candidates who have been running for president for years,” Bennet said at the committee’s summer meeting on Aug. 23. “It forces campaigns to force over millions of dollars to Facebook, the same platform that let the Russians interfere in 2016, instead of harnessing the resources to talk to voters.”

Some candidates who have already qualified have said they’re OK with the rules.

2020 Watch-New: On the criticism of @TheDemocrats #DemDebates polling criteria, @AndrewYang tells @foxnewspolitics “I’m a little bit biased because I’m making the fall debates so I think the rules are fine” ADDS “the rules have been out there for us all to see for months.” #FITN pic.twitter.com/MbOWKWqrh8

“I’m a little bit biased because I’m making the fall debates, so I think the rules are fine,” businessman Andrew Yang, who has been rising in the polls, told Fox News on Aug. 26. “I think the DNC has been very fair and open and transparent.”

“The rules have been out there for us all to see for months, and if you were going to complain about the criteria, you would probably want to complain about it a little bit earlier in the process to make it seem like it’s not purely self-interested,” he said.

DNC War Room director Adrienne Watson told Fox: “The debate rules have been public for months, and candidates have been given more opportunities and more time to qualify for debates than in previous cycles.”

Besides Yang, the debate will feature former and current politicians, including the frontrunners in the polls: former Vice President Joe Biden and Sens. Bernie Sanders (I-Vt.) and Elizabeth Warren (D-Mass.).

Correction: A previous version of this article incorrectly stated the deadline to qualify. It is Aug. 28. Epoch Times regrets the error.