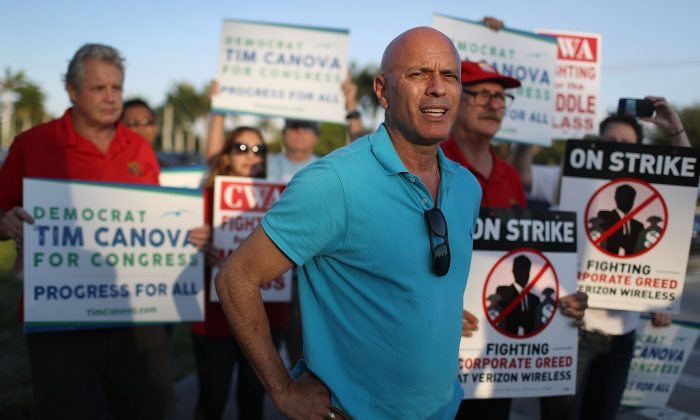 In the recent indictment of 12 Russian government operatives, Special Counsel Robert Mueller alleges that an unnamed congressional candidate requested and received stolen data on his opponent—oblivious that he was communicating with Russian operatives. The unnamed candidate’s likely identity was quickly revealed on social media as Democrat Tim Canova—who denies receiving anything.

Mueller, who was, among other things, appointed to probe alleged Russian meddling in U.S. elections, stated in the indictment that “on or about August 15, 2016, the [Russian] Conspirators, posing as Guccifer 2.0, received a request for stolen documents from a candidate for the U.S. Congress. The Conspirators responded using the Guccifer 2.0 persona and sent the candidate stolen documents related to the candidate’s opponent.”

On the day Mueller mentions, Aug. 15, Daniel Deriso posted on Twitter what could be broadly described as a request for documents.

“@GUCCIFER_2 Got anything on the Wasserman Schultz primary?” he wrote.

Reddit users picked up on this and connected the dots to Tim Canova.

Deriso was a field organizer for Tim Canova, who challenged Rep. Debbie Wasserman Schultz (D-Fla.) in the 2016 Democratic primary.

Canova filed a complaint against Wasserman Schultz with the Federal Elections Commission for her use of Democratic National Committee (DNC) staff in her campaign, which should count as a campaign contribution she failed to report in her FEC filings.

That complaint was filed before the indictment alleges there was an exchange with Russian agents.

Wasserman Schultz chaired the DNC at the time and Canova used her emails with DNC staff as evidence. The emails were released by Wikileaks starting July 22, 2016.

The Mueller team alleged Russian hackers stole the emails and provided them to “Organization 1” (presumably Wikileaks) on July 14, 2016.

But Wikileaks founder Julian Assange told ITV he had “emails related to Hillary Clinton” on June 12, 2016.

Moreover, Canova’s complaint was dated Aug. 8—a week before Deriso posted his tweet.

“I doubt he ever heard back from any hackers. His job was knocking on doors and recruiting volunteers,” Canova told The Epoch Times via email. “No employee or agent of my campaign was ever authorized to contact any hackers and I never received any hacked information.”