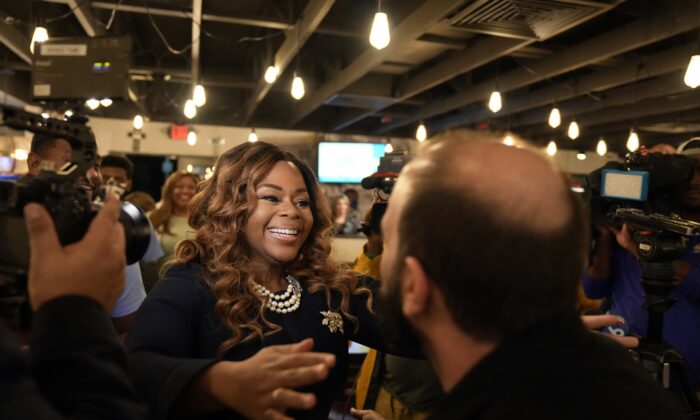 Democrat Sheila Cherfilus-McCormick has won a special election in a heavily blue-leaning district in Florida to replace the late U.S. Rep. Alcee Hastings.

Cherfilus-McCormick won the 20th Congressional District race over Republican candidate Jason Mariner, receiving 43,663 votes, or about 79 percent, to Mariner’s 10,883 votes, or about 20 percent, according to The Associated Press. The district, in which Democrats outnumber Republicans by a nearly 5–1 ratio, AP says, includes most of the majority-black neighborhoods in and around Fort Lauderdale and West Palm Beach.

Hastings, a Democrat, died in April 2021 of pancreatic cancer.

Cherfilus-McCormick ran her campaign on a slew of progressive policies and promises, including support for a universal basic income (UBI). Her proposal would give every American a guaranteed $1,000 per month, a concept that has seen some movement in Congress; Rep. Ilhan Omar (D-Minn.) has introduced a bill in the House that seeks to implement a UBI.

“As your next congresswoman, I promise—I vow—to make sure that everybody has an opportunity to live in this great country,” Cherfilus-McCormick said during her victory speech. “I promise to ensure that everyone can live in this society and move ourselves forward.”

She has also pushed for “Medicare for All” policies, but these have long had difficulties getting off the ground due to the objections of senators of both parties, including moderate Democrats such as Sens. Joe Manchin (D-W.Va.) and Kyrsten Sinema (D-Ariz.), who have both objected to major overhauls of government social spending in the past.

Cherfilus-McCormick, who will be the first member of Congress of Haitian descent, according to the Haitian American Elected Officials Network, pushed strongly during her campaign for a pathway to citizenship for millions of illegal aliens, even as the U.S. experiences an unprecedented immigration crisis on its southern border.

In the district, which is one of the most heavily black districts in Florida, Cherfilus-McCormick won by a slightly higher margin than President Joe Biden, who won the district with 77 percent of the vote in 2020.

Mariner, an advertising executive and ex-felon who ran a campaign as a Washington outsider, focused heavily on election integrity, and made clear that he was, like millions of other Americans, suspicious of the results of the 2020 election. He also has made statements in support of the Jan. 6, 2021, defendants, many of whom are currently being held without bail in a D.C. jail.

That’s an issue that particularly affects low-income areas such as the 20th District, where nearly 1 in 5 people live in poverty. Because schools are largely funded through local taxes, poorer areas usually have poorer-quality schools, and for families in poverty, there is no alternative. Thus, Mariner focused heavily on school choice as a practical solution to the problems faced by the residents.

He also pushed for strengthening law enforcement in order to allow the police to keep streets “safer” and “drug-free.”

“This is not a concession speech,” Mariner insisted after Cherfilus-McCormick’s victory became obvious. “People deserve to have a fair shake at who governs them, and they didn’t get that.”

While speaking to reporters on Jan. 11 before the results came in, Mariner decried the lack of attention on the race.

“A lot of people don’t know that this election is going on,” he said.

With Cherfilus-McCormick’s victory, the Democratic majority in the House has increased slightly to 10 seats from 9. At the same time, Republicans have lost one seat in the House after Rep. Devin Nunes (R-Calif.) recently tendered his resignation to help lead Trump’s new media and technology group.

This leaves a new House makeup of 222 Democrats and 211 Republicans. That’s good news for Speaker of the House Nancy Pelosi (D-Calif.), who can now spare slightly more Democratic defectors.

Meanwhile, early indicators show that majority may be chipped away by Republicans in November.

Because Cherfilus-McCormick won the seat during an election year, she may immediately face a challenger in the district’s August primary election.

She won the party’s nomination by the narrowest of margins, which all but guaranteed that she would be sent to the House in the blue stronghold. After a hand recount of the primary votes, it was determined that she edged Democratic challenger and Broward County Supervisor Dale Holness by five votes.