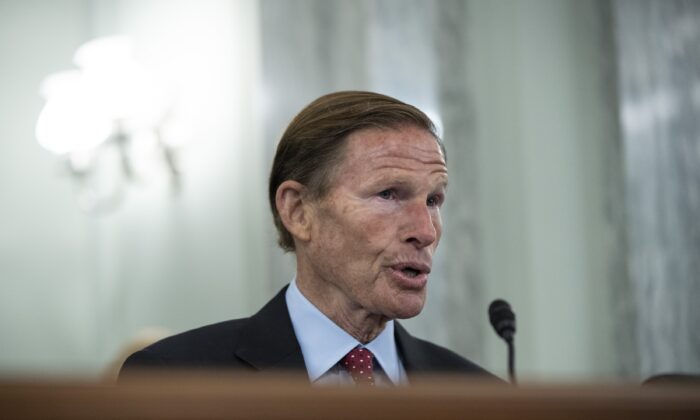 Democrat Senator Under Fire After Speaking at Communist Group’s Gala

Sen. Richard Blumenthal (D-Conn.) spoke during a recent gala held by a communist group, hailing the event as a “remarkable occasion.”

Blumenthal was present when the Connecticut People’s World Committee, a branch of Communist Party USA, held an awards ceremony earlier this month. He was introduced as a “special surprise guest.”

“I am really excited and honored to be with you today and to share this remarkable occasion,” Blumenthal said.

“You don’t have to agree with anyone or everyone, with any party or any particular union or organization. I’m here to honor the great tradition of activism and standing up for individual workers that is represented by the three honorees here,” he added.

Blumenthal spoke for about six minutes.

“If you are not already part of the Communist Party, we invite you to participate and contribute and join,” Lisa Bergmann, one of the event’s hosts, said after the speech.

The senator’s appearance was promoted by the committee in a summary of the night’s events.

But it drew criticism from others.

“My father was held captive and tortured by the communist regime in Cuba It is INSANE to watch politicians in our country embrace the ideology that caused millions across the world to pay a heavy price,” Mercedes Schlapp, a former Trump administration strategist who hosts the Conservative Political Action Conference, wrote on Twitter.

“Blumenthal, one of the wealthiest US senators, is cozying up with the COMMUNIST PARTY,” the Connecticut GOP said, adding that “It’s time to send our embarrassment of a senator to an early retirement in 2022.”

Blumenthal staff members didn’t respond to emailed questions, including whether the senator is aware that communist regimes have been responsible for the deaths of tens of millions of people.

Blumenthal, 75, was first elected to the Senate in 2011 and won reelection in 2016 with approximately 63 percent of the vote.

Blumenthal has previously faced criticism for fabricating military service in the Vietnam War.

Blumenthal did serve in the military, but his service was entirely in the United States.

Blumenthal told reporters during a press conference in 2010, after news outlets highlighted his lies, that he had “misspoken about my service and I regret that.”

“But I will not allow anyone to take a few misplaced words and impugn my record of service to my country. I served in the United States Marine Corps Reserves, and I am proud of it,” he added.