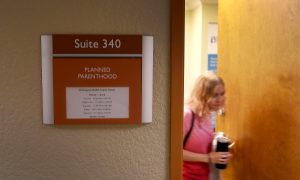 We’re in the #MeToo Era When Women’s Stories Are Heard: Here’s Mine
0 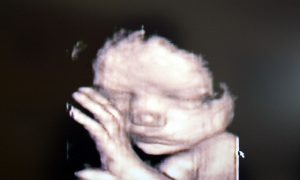 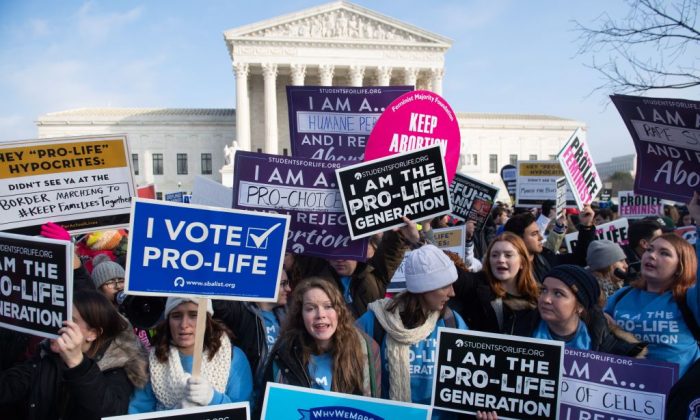 Pro-choice activists hold signs in response to anti-abortion activists participating in the "March for Life," an annual event to mark the anniversary of the 1973 Supreme Court case Roe v. Wade, which legalized abortion in the US, outside the US Supreme Court in Washington on Jan. 18, 2019. (SAUL LOEB/AFP/Getty Images)
Viewpoints

The Legislature of New York State, in a burst of joyful freedom-talk, has just passed a law making late-term abortions (after 24 weeks) far more likely. It is not easy to get a live baby that age out of a pregnant mother’s unripe womb, and most citizens are simply unaware of how that is done. In a future piece, I will explain some of the graphic realities and the moral and philosophical confusions relied upon to justify them.

But for now, there is a deeper layer that needs focus. All women understand that the work of childbearing and nurturing falls disproportionately on them, and so no democracy can “equalize” the sexes unless this natural biological inequality is somehow transformed into a chosen consequence of a woman’s will.

Laws permitting abortion-on-demand achieve this result by enabling women to eliminate their unwanted children, leaving them only with wanted children, thus removing any grounds for complaint about unchosen inequality.

What this distinction tells us is that almost all modern democracies locate their moral justification for abortion in the will of the woman, and not in her biology. In this sense, all modern abortion regimes are an expression of the modern triumph of the will over nature.

In the past, the triumph over nature was achieved by careful women prior to the sex act—in which they denied themselves by an act of will, or via contraception—rather than by an act of will after the sex act. The will to sustain one’s freedom formerly exerted before pregnancy has been transformed into control over the life or death of the unborn child in order to sustain one’s freedom after pregnancy.

Presto—a woman can choose a freedom equal to that of any man, provided she is willing to kill her own child in the womb.

In most democracies, citizens are warned sternly on wine bottles and cigarette packages not to drink or smoke, for fear of “harming the fetus,” but they may kill their own unborn child with impunity at any time prior to the moment of natural birth and drop it in the garbage. In Canada, which has no law against abortion whatsoever, this is a woman’s right even up to the moment before natural birth.

Although I was once in favor of abortion for hard cases (though never as a general or contraceptive right), the facts of this grisly reality and what I believe is the inescapable logic of the arguments against it, have convinced me that abortion as practiced in all modern democracies must be judged a distinct moral evil no different in character from the early programs of death-by-infanticide practiced by the Nazi regime in Germany, and the genocidal programs engaged in by all other totalitarian regimes. They all engage in moral and legal trickery to make this possible.

The common legal trick that enables them to kill human life in the womb with impunity is the same everywhere.

They invent a kind of category law to redefine the unborn child as a non-person or as not yet a human being, until “it has completely proceeded, in a living state, from the body of its mother” (this, from Section 223 of Canada’s Criminal Code). This is often called the “born alive” rule.

The point is, the unborn human child is legally defined away as non-human prior to birth. Then you can do with it whatever you want.

Now, it so happens this was the same legal trick used by all former slave-owning regimes in history. They legally defined those they wanted to enslave as property, or chattels, or non-persons who could then be bought, sold, or killed at will.

All democracies that permit abortion are using the same trick. And that’s why I say that almost all the modern democracies have become slave regimes of a new kind in which, in order to make women as free from biology as men, they have enslaved all unborn children.

What this is telling us is that, in order to resolve the contradiction at the heart of egalitarian democracy—the fact that we trumpet “equal freedoms and rights,” even though men and women can obviously never be equals in natural biological terms—we have had to sacrifice a whole class of human beings by defining them as slaves.

In effect, in order to sustain the ideological purity of our democratic system, we have replaced chattel slavery with womb slavery, and all the modern egalitarian democracies that have done this have mutated into slave regimes of a new kind.

In ancient times, in places like Greece and Rome, millions of human beings outside the womb were made chattel slaves to sustain a political ideology resting on victory in war, disdain by the educated for manual labor, to ensure leisure for the practice of the democratic rights of citizens (only), and so on. In other words, chattel slavery was a political and ideological necessity for the preservation of the political philosophy of the nation.

In the totalitarian regimes of Adolf Hitler and Josef Stalin, the sacrifices to the system, so to speak, were all those defined and enslaved as “internal enemies” (Jews, ordinary liberal and conservative protesters, artists, and so on) whose very existence threatened the ideological purity of the state.

Until very recently, the classical liberal democracies of the West welcomed the full expression of human biological differences. They rested on an original foundation of individual liberty and the natural differences this produces. They professed an equal start-line philosophy that celebrated merit and opportunity, let the chips fall where they may. And we still give this lip-service, at least.

But in a mere half-century, most democracies have mutated from their foundation in liberty to a new foundation of mandated equality, which is an equal finish-line philosophy. This is now the dominant justification for our democracies, and it has produced a dominant contradiction: The democracies of the West simply cannot figure out how to realize their latest ideological promise to half of the citizenry without allowing the killing of unborn children.