Demands Intensify for Security Fence Around Capitol to Come Down 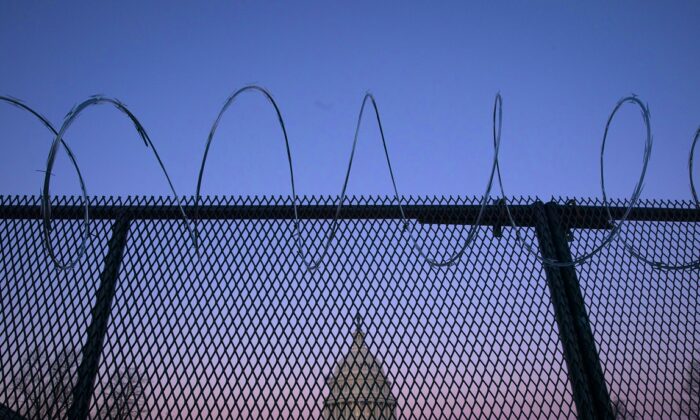 The U.S. Capitol building is seen through barbed wire fencing at sunrise in Washington on Feb. 8, 2021. (Sarah Silbiger/Getty Images)
By Mark Tapscott

Forty-two House Republicans want Speaker of the House Nancy Pelosi (D-Calif.) to take down the razor-wire-topped steel barrier surrounding the U.S. Capitol complex and send the troops manning it home as soon as possible.

“We write with concerns about the security measures and enhanced fencing around the U.S. Capitol even though high-profile events like the inauguration are over,” the group said in a Feb. 5 letter to Pelosi.

“In particular, we are concerned with recent reports that the fencing surrounding the Capitol may become permanent. We are willing to have an honest debate about providing Capitol Hill Police (CHP) with the resources they need to be better prepared without turning the Capitol into a permanent fortress.

“To that end, we urge you to remove the barbed wire fencing surrounding the Capitol and send the National Guard troops home to their families. It’s time. It’s time for healing and it’s time for the removal of the fencing so the nation may move forward.”

Rep. Ted Budd (R-N.C.) was the leading signer of the letter, which was also signed by congressmen representing districts in 20 states spanning the country.

The signers acknowledged that “the events that happened on January 6 were horrific” and stronger security was needed in the wake of the violence.

“But it is time for Congress and its representatives to stop hiding. The American people see through the double standard. Members of Congress cannot demand more security and protection for themselves after they decried federal law enforcement activity across American cities last summer,” the signers said.

“The U.S. Capitol is a symbol of freedom both at home and abroad. It is a place where Americans from all walks of life can visit, learn about, and witness U.S. history. Sadly, because of the fortress-like security in place, this is no longer the case.

“American citizens who wish to visit are not allowed to because only authorized personnel and the military are permitted. The people who call Capitol Hill home live day in and out with fences, military trucks, and military personnel in their backyards, on their way to work, to school, or the grocery store. Enough is enough.”

The imposing barrier was hastily erected after the Jan. 6 riot, in which hundreds of protestors broke into the Capitol building, penetrating the Senate and House chambers, doing extensive property damage, and occasioning the deaths of five people.

President Donald Trump is being tried this week in the U.S. Senate after being impeached by the House for a second time on Jan. 14. Trump was acquitted last year by the Senate on unrelated charges. He appears likely to be acquitted again on the House Democrats’ charge that he incited an insurrection by encouraging the Jan. 6 riot.

The CHP conceded after the violence that it was unprepared for the events of Jan. 6 despite being forewarned. Trump had offered before that day to send 10,000 National Guard troops to help protect the Capitol.

Spokesmen for each of the 49 senators and representatives were emailed Feb. 9 with a message noting that a Jan. 27 Department of Homeland Security terrorism bulletin said the government “does not have any information to indicate a specific, credible plot” against the Capitol.

The message also linked to the letter from the 41 House Republicans and asked if the senator or representative supports the letter’s call for the fence to be taken down and the troops sent home.

Each of the offices was called on Feb. 10 with a repeated request for comment on the issue. Only a few of the committee members responded.

Chris Gallegos, spokesman for Sen. Cindy Hyde-Smith (R-Miss.), told The Epoch Times that the senator “is committed to ensuring the safety of the Capitol Complex and will carefully consider proposals submitted by the appropriate agencies making safety recommendations.”

“Senator Hyde-Smith would prefer to see fencing removed and troops return to their families as soon as possible,” he said.

Rep. Clay Higgins (R-La.) told The Epoch Times: “[The] fencing and barbed wire around the U.S. Capitol should’ve come down weeks ago. Such drastic and extended security measures were excessive and unnecessary.

“This is still the People’s House. Congress should be accessible to the Citizens we serve, as the Founders intended. Further, making members pass through metal detectors when entering onto the House floor is absurd. It is certainly an act of political theater and part of Speaker Pelosi’s insidious effort to demonize Republicans.”

Higgins was referring to the installation of metal detectors that House members must pass through before entering the House chamber.

Patrick Wright, spokesman for Rep. Donald Payne Jr. (D-N.J.) told The Epoch Times that “[Payne] believes that it is really a question for Capitol Police” and that he’s sure the fencing will be removed “when they believe there is no longer a credible threat to the nation’s elected officials.”

“Unless law enforcement authorities can produce detailed, confirmed information about a specific threat, there is no need to put barbed wire around the Capitol, and to fence it off from the American people,” said von Spakovsky, whose offices are across the street from the Senate office buildings.

Campaign strategists asked by The Epoch Times about the issue were divided in their responses, but not necessarily along partisan lines.

Republican strategist Matt Mackowiak said he “would let the Capitol Police make the determination” of when to remove the security measures, but he added that GOPers, should “focus instead on making [Pelosi] explain what the basis is and what the cost is for continuing the security.”

Democratic strategist Robin Biro, a U.S. Special Forces veteran, said he gets “that Speaker Pelosi is concerned about the optics of having that fencing still up.”

“I know that she has come under significant criticism from the GOP specifically for the fencing, but personally, I would be operating from an abundance of caution with this and would leave that fencing up until we were further away from the events of Jan. 6,” Biro said.

“The Capitol clearly had a physical security problem, and if layered fencing is a deterrent, I do not see the problem with leaving it up until calmer heads prevail and the political rhetoric dies down a bit and, at some point, politics goes back to being delightfully boring.”

Manley, who also worked for Sen. Ted Kennedy (D-Mass.), said, “As a long-time resident of Capitol Hill and someone who was lucky enough to spend most of my 21 years as a Senate staffer working out of the Capitol, I am totally opposed to a massive security presence that includes fencing off the complex.”

Manley added that “mistakes were made—with the former president deserving much of the blame for what happened—but the American people deserve ready access to the Capitol and other buildings.”

Darling said Pelosi “has created an unprecedented military encampment surrounding the Capitol” and should have instead “put up the fencing and called in the troops before the riots.”

He believes Republicans should be “stronger in calling for Pelosi to send the National Guard home and to lessen the fencing around the Capitol, because the troops and fencing are little more than political theater.”