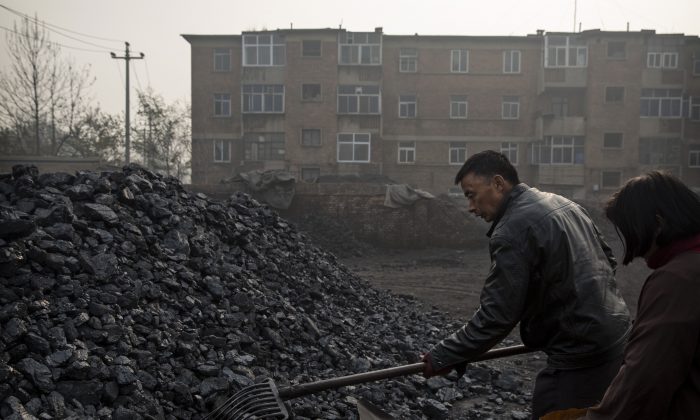 Chinese laborers work at a coal depot, which manufactures coal used for cooking and heating in Hebei, outside Beijing, China, on Nov. 21, 2014. (Kevin Frayer/Getty Images)
China

BEIJING—Thousands of Chinese miners who say they have not been paid for months staged a rare protest in a northeastern city, days after the provincial governor made the apparently false claim that no miner working for the province’s largest publicly owned mining company was owed any back wages.

Angry miners from Longmay Mining Holding Group Co. Ltd. and their family members marched through the city of Shuangyashan on Saturday and gathered in front of the company’s local offices.

In response, the government of Heilongjiang province issued a statement Saturday night acknowledging that many Longmay employees are owed wages and benefits, backtracking from Governor Lu Hao’s assertions earlier this month.

The protest and the change in the government’s stance underline the sensitivity of the employment issue, as Chinese miners and others in state industries are losing their jobs or seeing their pay drastically cut. China’s massive state-owned mining companies are struggling to boost efficiency and reduce their payrolls amid a severe slump in coal demand brought on by sharply slowing economic growth.

Chinese Premier Li Keqiang has told the annual legislature, which convenes in Beijing this week, that 100 billion yuan ($15 billion) has been set aside, primarily to assist workers who should be diverted from industries such as coal and steel, reducing their capacities.

The pain is particularly acute in China’s northeastern rustbelt, where Heilongjiang is located. Its biggest state-owned mining company, Longmay, reduced its work force by 22,500 people recently, according to state media reports.

Longmay reportedly owed 800 million yuan ($123 million) in back pay for 2014. A lengthy investigative article by China’s leading financial news group, Caijing, reported in January that pay for Longmay workers has been continually cut, and even those reduced wages had not been paid for three to four months.

Then on March 6, Lu, considered a rising political star, said at the national legislature’s annual session that the annual payrolls of Longmay are 10 billion yuan ($1.5 billion), about a third of the fiscal budget for the provincial government.

But despite the challenges, Longmay’s 80,000 miners hadn’t received a single cut in wages and all were paid on time, the governor said. The remarks seemed aimed at showing that Longmay and the province were meeting the leadership’s expectations for competently handling economic challenges.

Calls to local police, government offices and Longmay rang unanswered Sunday, but witnesses said thousands of workers took part in the demonstration, which began on Friday and peaked on Saturday in the mining town of Shuangyashan. A local resident who gave just his last name, Li, said the protesters were holding banners demanding back pay. Li said he knew of Longmay workers who had not been paid for six months.

Another eyewitness, who gave her last name as Wang, said that she has family members working for the mines. She said their wages were cut to less than 1,000 yuan ($154) per month, and that the workers either did not receive their full wages or were not paid at all for months.

She said the protesters displayed a banner reading: “We need to eat. We need to live.”

Both Li and Wang said that the protest was peaceful and that a large number of riot police had been dispatched to the scene. They said the demonstration ended around 4 p.m.

The provincial statement came out after 9 p.m. Saturday, saying Lu had held a special meeting on Longmay in Beijing that afternoon.

The statement made no mention of the protest in Shuangyashan, but said Longmay had failed to pay wages, taxes and insurance contributions. It said the provincial government would work with Longmay to raise money and would make every effort to pay the workers.

The statement did not mention Lu’s earlier remarks, but hinted that he had been fed false information. The provincial government demanded that Longmay, municipal governments and provincial agencies overseeing the industry report truthfully to the provincial leadership.

“Should important information be reported inaccurately again, it will be dealt with seriously,” the statement said.