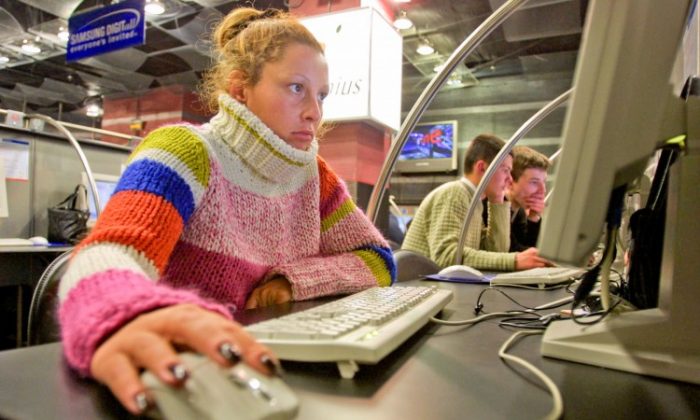 A woman is using a computer at the Internet café Time Online in downtown Moscow, Russia, on May 5, 2002. (Oleg Nikishin/Getty Images)
Russia-Ukraine War

Russians are increasingly turning to tools such as VPNs to bypass the internet blockade within the country in the wake of the Kremlin’s invasion of neighboring Ukraine and its crackdown on a number of social media platforms.

VPNs, also known as virtual private networks, allow users to change the location from which they are accessing the internet, meaning they can evade location-based restrictions. It also creates an encrypted tunnel for users’ data, making browsing more private.

Amid the Russian government’s crackdown on a number of social media services and news outlets, more and more Russians are turning to VPNs so that they can continue to stay connected with the outside world and get information from sources that don’t just consist of state-owned news outlets.

According to Top10VPN.com, which live tracks spikes in the demand for VPN around the world, the desire for VPNs surged by 1,092 percent in Russia on March 5, exactly one day after Russia’s communications agency Roskomnadzor blocked access to Facebook.

A statement from the agency posted online said Facebook has engaged in “26 cases of discrimination against Russian media and information resources.”

Demand for VPN services also surged 1,033 percent higher than the daily average over the week prior to the invasion, data from Top10VPN.com shows, and such demand was still slightly higher as of March 5, where it peaked at 1,092 percent above the average.

As of March 7, Russians still had a high interest in VPNs, with figures 850 percent higher than the pre-invasion baseline, while VPN providers Surfshark and ExpressVPN have both said they have experienced an increase in Russian’s purchasing or looking to purchase VPNs.

Top10VPN.com reports that Russia’s government has blocked over 200 news and financial sites, including both foreign and local ones since its military forces invaded Ukraine.

They include Radio Free Europe, BBC News, Deutsche Welle, and Voice of America Russian-language sites, as well as several Russian TV and radio stations, including TV Rain and Echo of Moscow, among others.

Russian officials have accused multiple news outlets and websites of spreading disinformation regarding its invasion of Ukraine, as opposed to sticking with President Vladimir Putin’s so-called narrative that it is actually a “special military operation.”

On Friday, President Vladimir Putin signed a law that will criminalize anyone sharing “deliberately false information about the actions of Russian military personnel in Ukraine.”

Under the new law, “unofficial” reporting on the invasion is a crime that is punishable by up to 15 years in prison.

Specifically, it will punish those who knowingly “distort the purpose, role, and tasks of the Russian Armed Forces, as well as other units during special military and other operations,” according to Vasily Piskarev, head of the Duma’s Security and Anti-Corruption Committee in a post that has since been deleted, but that is still available on the web archive.

On the weekend of Feb. 26–27, VPN demand skyrocketed and was 544 percent higher than the daily average in the first half of the month on Feb. 28.

Demand continued to rise over the week, and on March 2 peaked at 600 percent higher than before the war started, while continuing to increase.