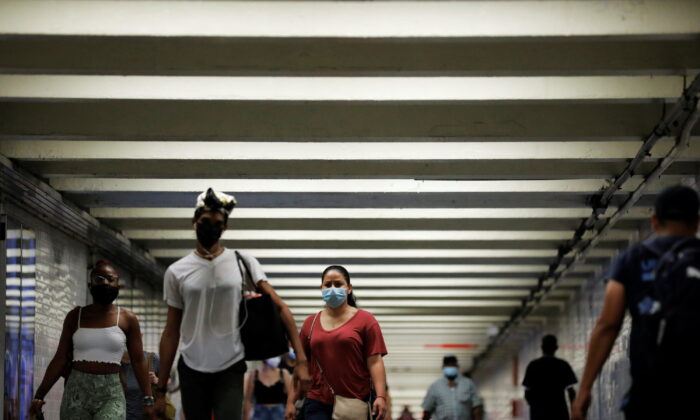 People wear masks as they pass through a pedestrian subway as cases of the infectious coronavirus Delta variant continue to rise in New York City, New York, on July 26, 2021. (Andrew Kelly/Reuters)
Businesses in COVID-19

Delta Air Lines will maintain its ban on some individuals who would not comply with a COVID-19 mask rule on Delta flights, although the company also revealed that it plans to restore flight privileges to about 2,000 customers who were barred from flights.

“With masks now optional, Delta will restore flight privileges for customers on the mask non-compliance no-fly list only after each case is reviewed and each customer demonstrates an understanding of their expected behavior when flying with us,” spokesperson Anthony Black told news outlets this week.

But individuals “who demonstrated egregious behavior and are already on the permanent no-fly list remain barred from flying with Delta” even after the travel mask mandate was lifted by a Florida judge earlier this week, Black continued.

About 2,000 people will see their Delta “flight privileges” restored, the airline told Reuters. About 1,000 people will remain permanently banned from flying with Delta, the firm added to the news agency.

Delta’s announcement follows a similar decision by United Airlines on Tuesday to allow some of the roughly 1,000 people who have been banned for not wearing masks to return to flights on a “case by case basis.” Chicago-based United said those people would be allowed to return to flights “after ensuring their commitment to follow all crewmember instructions on board.”

On Monday, U.S. District Judge Kathryn Kimball Mizelle wrote in an order that the Centers for Disease Control and Prevention’s (CDC) rule that mandated mask-wearing inside airports, airplanes, and other public transportation violated federal administrative law. The Department of Justice later said in a statement that it plans to appeal the ruling on behalf of the CDC.

“In light of today’s assessment by [the CDC] that an order requiring masking in the transportation corridor remains necessary to protect the public health, the department has filed a notice of appeal in Health Freedom Defense Fund, Inc., et al., v. Biden, et al,” Anthony Coley, a spokesman for the Department of Justice, said in a statement on Wednesday.

After the ruling was handed down, major airlines such as United, Delta, American Airlines, Southwest Airlines, and more announced they would make masks optional for customers and passengers. Before Mizelle’s order, the CEOs of those airlines called on the Biden administration and CDC to end the rule, which was implemented in January 2021.

The Epoch Times has contacted Delta Air Lines for comment.