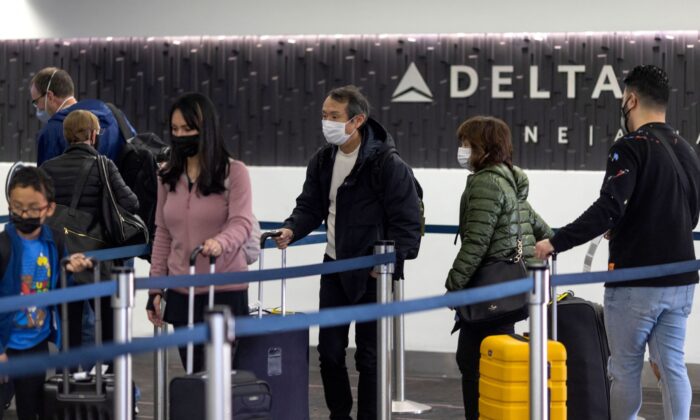 Delta Airlines CEO Ed Bastian has warned that airfares for domestic flights in the United States could increase by 5 percent to 10 percent amid a spike in oil prices.

Oil prices—already soaring in the United States—have been further exacerbated following Russia’s invasion of Ukraine and are now at 14-year highs.

Bastian told the BBC in an interview published on March 17 that the impact of higher fuel prices on domestic flights “is probably about $25 on a ticket, that could be anywhere between 5 percent to 10 percent at these high levels of oil… and international [flights] will be a bit higher than that.”

In addition to higher airfare costs, Delta is also planning to implement fuel surcharges on international flights in an effort to combat the rising cost of oil.

Jet fuel prices ended last week about 80 percent higher than a year ago, according to the International Air Transport Association.

In response, other airlines including AirAsia, Emirates, and Japan Airlines have taken similar steps in adding fuel surcharges to offset the rising fuel prices.

President Joe Biden announced a ban on all Russian oil imports last week as part of the administration’s latest efforts to isolate Russia’s economy in response to its invasion of Ukraine.

In 2021, the United States imported an average of 209,000 barrels per day (bpd) of crude oil and 500,000 bpd of other petroleum products from Russia, according to data by the American Fuel and Petrochemical Manufacturers (AFPM) trade association.

Western nations have already imposed a string of sanctions on Russian financial systems and individuals with close ties to Russian President Vladimir Putin.

“This is a move that has strong bipartisan support in Congress and I believe in the country,” said Biden in announcing the move. “Americans have rallied to support the Ukrainian people and made it clear that we will not be part of subsidizing Putin’s war.”

Biden acknowledged that the ban on Russian oil imports would undoubtedly impact Americans who are already battling with record-high gas prices in the United States.

According to the American Automobile Association (AAA), the national average gas price for regular fuel in the United States on Thursday was $4.289, up from $2.884 a year ago.

“Russia’s aggression is costing us all, and it’s no time for profiteering or price gouging” Biden said.

Bastian’s announcement regarding increased airfares comes after bosses for some of the biggest carriers, including Delta Air Lines and American Airlines, on March 15 warned that the cost of airfares could soar this spring and summer, citing a growing demand for air travel and rising fuel expenses.

Airline bosses warned investors that the average price for a gallon of jet fuel is expected to rise between 17 percent and 33 percent in the current quarter compared to the final three months of 2021, and between 47 percent and 72 percent compared to what they paid a year ago, CNN reported.

In response to the rising cost of fuel, U.S. airlines plan to utilize the unprecedented air travel demand to pass the higher costs onto consumers.

“We’re seeing an increase in demand that is really unprecedented,” said Delta President Glen Hauenstein. “I have never seen … demand turn on so quickly as it has after Omicron.”

The Delta president added that the airline needs “to recapture somewhere between $15 and $20 each way on an average ticket value of about $200, “which is equivalent to a price hike of 7.5 percent to 10 percent, Financial Times reported.

Hauenstein said he felt confident that customers would be willing to pay the higher ticket costs.

“It’s really been the strong demand and better pricing environment … [that has] allowed us to more than offset the fuel cost,” Hauenstein said.