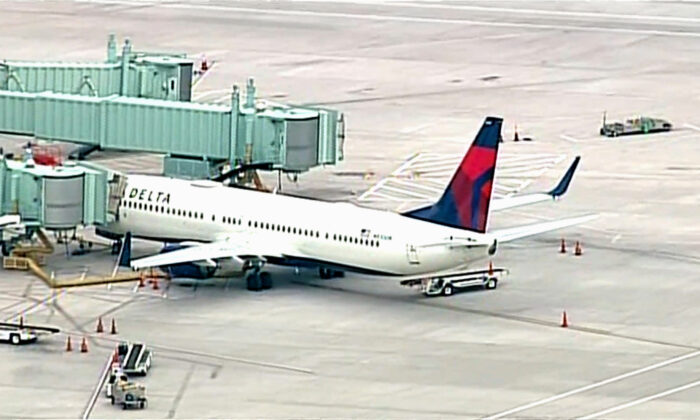 A Delta flight from Los Angeles International Airport bound for Nashville makes an emergency stop in Albuquerque, N.M., after a passenger attempted to breach the cockpit on June 4, 2021. (Courtesy of KOAT)
US News

LOS ANGELES—An unruly passenger who tried breaking into the cockpit of a Delta Air Lines flight bound for Tennessee from California was subdued by cabin crew and fellow passengers as the plane was diverted to New Mexico, officials said on Friday.

Delta Flight 386, from Los Angeles bound for Nashville, arrived around 2:20 p.m. local time at Albuquerque International Sunport, where authorities removed the passenger from the plane and took him into custody, an airport spokesperson said.

Delta said the Boeing 737-900 had 162 passengers and six crew members aboard.

The Federal Bureau of Investigation in Albuquerque said on Twitter that it was responding to the incident and that there was “no threat to the public at this time.” The FBI provided no further details.

The #FBI is responding to a report of a diverted flight at @ABQSunport. There is no threat to the public at this time. pic.twitter.com/GmnOdZPact

The airline and law enforcement did not say whether the individual was armed, whether he was under the influence of alcohol or drugs, or what may have prompted his outburst.

No one was hurt during the incident, and the flight resumed its trip to Nashville after the diversion, the airport spokesperson said.

Los Angeles-based CBS News affiliate KCBS-TV posted cellphone video taken by several passengers showing a man lying on his stomach in the aisle of the aircraft repeatedly yelling “Stop this plane” as he was being restrained.

A flight attendant and passengers bound his hands and feet with yellow cord, then carried him to the rear of the aircraft, where he was placed face down in a seat, the video clips showed.

“Thanks to the crew and passengers of Delta Flight 386 … who assisted in detaining an unruly passenger as the flight diverted to Albuquerque,” Delta said in a statement, adding that the aircraft landed without incident and the passenger was removed by law enforcement.

By Steve Gorman and Brendan O’Brien