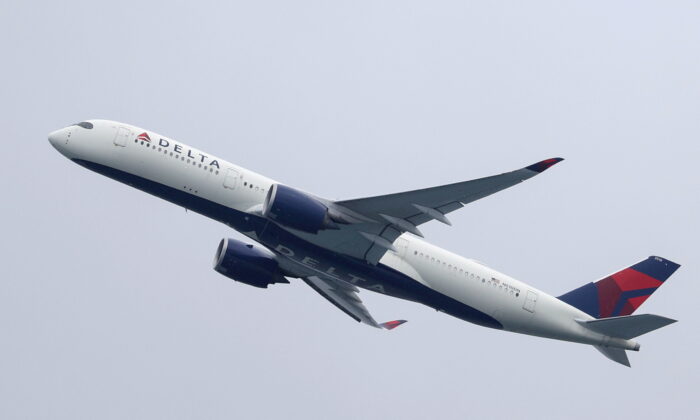 A Delta Air Lines Airbus A350-900 plane takes off from Sydney Airport in Sydney, Australia, on Oct. 28, 2020. (Loren Elliott/Reuters)
Companies

CHICAGO—Delta Air Lines Chief Executive Ed Bastian on Wednesday waded into the debate on mandating coronavirus vaccines, saying government directives are not the only way to make people get the jab.

“Mandate is only one way to get people vaccinated,” Bastian told Reuters in an interview. “It’s a very blunt instrument.”

As part of efforts to control the pandemic, which has killed more than 700,000 Americans, President Joe Biden, a Democrat, last month signed an executive order requiring federal contractors to mandate COVID-19 shots for employees and get them vaccinated by Dec. 8.

While supporters of vaccine mandates see them as necessary to pull the country out of the nearly two-year-old pandemic, critics are calling them unconstitutional and authoritarian.

The measure has drawn a sharp reaction from some Republicans, with Texas Governor Greg Abbott on Monday barring COVID-19 vaccine mandates by any entity, including private employers.

Rebuffing the governor, Southwest Airlines and American Airlines – both based in Texas – have decided to comply with Biden’s executive order.

The vaccine diktats, however, are also being challenged in courts. Six employees of United Airlines, which was the first U.S. carrier in August to require vaccinations for all domestic employees, have filed a class action in federal court in Texas accusing the company of unlawfully denying religious and medical exemptions from the vaccine mandate.

Ahead of a hearing on Wednesday, the court on Tuesday temporarily restrained United from placing on unpaid leave any employee who receives religious or medical exemptions.

U.S. airlines have a number of federal contracts. Delta said the contracts are worth hundreds of millions of dollars a year.

However, the Atlanta-based company is the only major U.S. airline that has still not mandated vaccines for employees. Instead, the carrier has imposed a $200 monthly health insurance surcharge for unvaccinated staff.

The measure, in part, has helped increase staff vaccination rate to 90 percent. Bastian expects the rate to climb up to 95 percent in November.

“It’s better if you can work collaboratively with your employees,” he said. “You can trust your employees to make the right decisions and respect their decisions.”