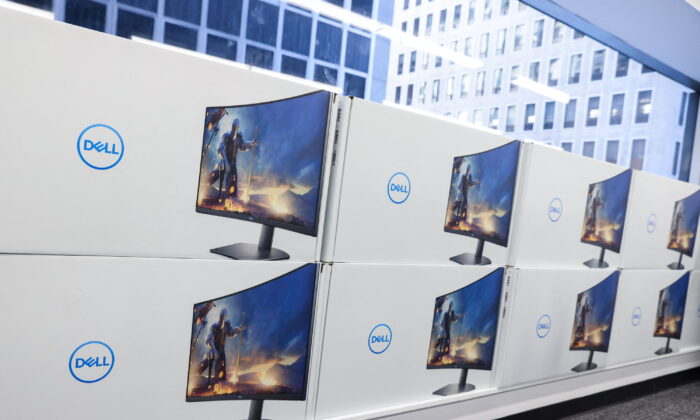 Dell monitors are seen for sale in a store in Manhattan, New York City, on Nov. 24, 2021. (Andrew Kelly/Reuters)
Business & Markets

Dell Technologies Inc joined rivals in predicting a slowdown as runaway inflation and the darkening economic outlook prompt consumers and businesses to tighten their purse strings, sending its shares down 8 percent in extended trading on Thursday.

Industry majors from Intel Corp to Lenovo Group have warned of a slump in the personal computer market after a two-year boom during the pandemic, with research firm Gartner estimating shipments would drop 9.5 percent in 2022.

While Dell’s enterprise-focused business has somewhat made up for the PC slowdown, company executives were cautious about the outlook for the unit that generates nearly half its revenue.

“There’s caution around future hiring, trade-offs within their IT budgets given the macroeconomic uncertainty, customers reducing the size of orders and buying for only immediate requirements,” co-Chief Operating Officer Chuck Whitten said on a post-earnings call.

The company expects third-quarter revenue between $23.8 billion and $25 billion, below the $26.34 billion estimated by analysts, according to Refinitiv data.

Revenue growth in the second quarter was the slowest in more than one and a half years as the company also took a hit from a surge in the dollar and COVID-19 flare-ups in China—its second-largest market.

The stronger dollar has pressured earnings of technology companies from Microsoft Inc to Apple Inc, and will likely continue to be a headache as the Federal Reserve raises interest rates.

Consumer revenue declined 9 percent, but was somewhat offset by a 15 percent jump in the commercial business that benefited from businesses placing orders to gear up the hybrid-work era.

Dell reported an adjusted profit of $1.68 per share on revenue of $26.43 billion, which was 9 percent higher.