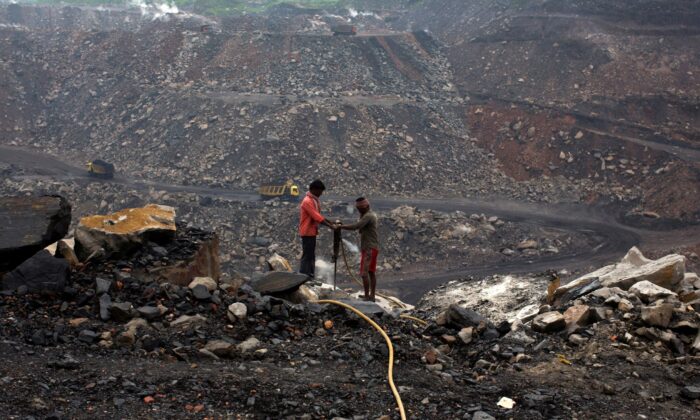 Workers drill at an open cast coal field at Dhanbad district in the eastern Indian state of Jharkhand on Sept. 18, 2012. (Ahmad Masood/Reuters)
Economy

NEW DELHI—Delhi Chief Minister Arvind Kejriwal on Saturday warned of a power crisis in the Indian capital due to a coal shortage, which has already triggered electricity cuts in some of the country’s eastern and northern states.

“Delhi could face a power crisis,” Kejriwal said in a tweet in which he also shared a copy of a letter to Prime Minister Narendra Modi flagging a shortage of fuel in power plants in and around Delhi.

Kejriwal urged the federal government to divert supplies of coal and gas to utilities supplying the capital, saying the city housed strategic centres of national importance and supply was critical to hospitals and coronavirus vaccination centres.

A crippling coal shortage has caused a supply shortage in states such as Bihar, Rajasthan and Jharkhand, with residents in the regions experiencing power cuts stretching to up to 14 hours a day.

India said on Saturday it will facilitate gas supplies to enable two power plants in Delhi to operate. State-run NTPC Ltd has also been directed to increase coal stocks to coal-fired plants from neighbouring Uttar Pradesh state to ensure supply.

A power supply shortage in Uttar Pradesh, which faces elections in early 2022, had surged to 5.6 percent on Friday, the highest in recent days, federal government data showed.

In India, over half of 135 coal-fired power plants, which supply around 70 percent of the country’s electricity, have fuel stocks to last less than three days, Reuters reported on Friday.

Demand for industrial power has surged in India after the second wave of the coronavirus pandemic, with increased economic activity driving up coal consumption in the world’s second largest consumer of the commodity.