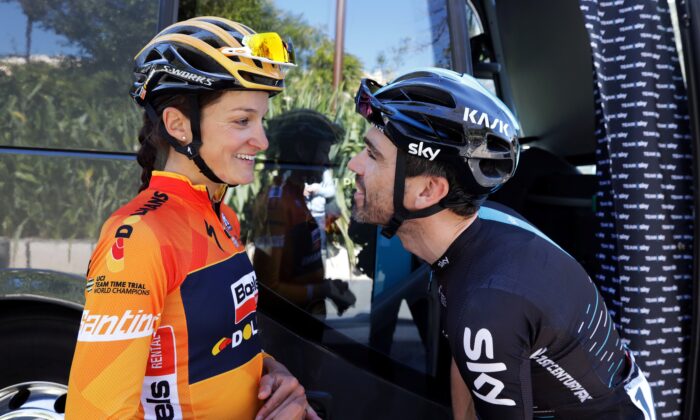 Britain’s Lizzie Deignan rode to a landmark victory in the inaugural Paris Roubaix Femmes as rain, mud and crashes made it a memorable debut for the world’s best female riders over the infamous cobbled course on Saturday.

The former world champion produced a dominant ride over the 115.6km (around 72 miles) course and held off a powerful late surge by Dutch great Marianne Vos to win by one minute and 17 seconds.

“I feel incredibly proud,” Deignan, who adds the maiden Paris Roubaix to her other notable triumphs including last year’s Liege-Bastogne-Liege, said.

“Women’s cycling is at this turning point, and today is part of history. It proves the appetite for women’s cycling and that the riders can do one of the hardest races in the world.”

“Today I was the third rider (in the team) and I had to be in the front at the first cobbled section to protect my leaders. But then I saw there was a gap so I just kept going.”

After three circuits around Denain, Trek Segafredo rider Deignan established a small lead over the pack just before the first of 17 cobbled sections with more than 49 miles remaining.

With riders struggling to organize a concerted chase, many of them slithering over on the greasy cobbles, former world champion Deignan powered into a commanding lead.

Vos finally put the hammer down to try and catch Deignan, slicing into the lead as she powered through the Carrefour de L’Arbre cobbled section.

Vos closed the gap to 1:18 as Deignan began the final 6 miles, but Deignan proved unshakeable out front as the famed Roubaix velodrome finish approached.

Deignan was so far ahead that the finale inside the Roubaix velodrome resembled a lap of honor as the Yorkshire rider wrote her name into the cycling history books.

Vos finished more than a minute behind, with Deignan’s teammate Elisa Longo Borghini in third place.

Organisers ASO, who also own the Tour de France, added a women’s version of the 125-year-old Paris Roubaix last year, but the COVID-19 pandemic meant they had to wait another year to ride the so-called Hell of the North.