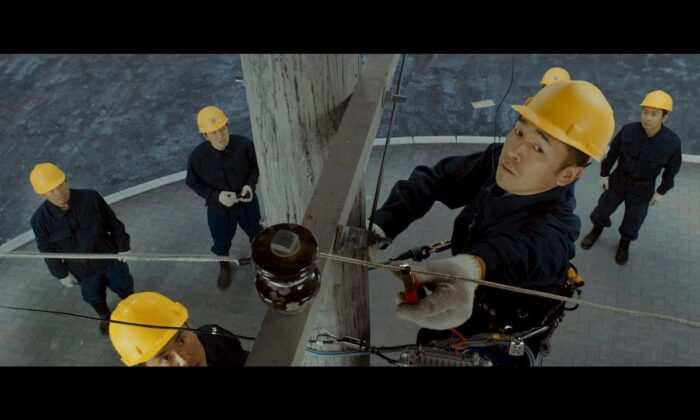 "Eternal Fifty Minutes" tells the story of six Falun Gong practitioners from Changchun who successfully intercepted the city’s state-controlled cable television to broadcast the true story behind the communist regime’s persecution against adherents of the meditation practice. (Minghui)
Chinese Regime

‘Defiance in the Kingdom of Fake News’: Six Chinese Achieve the Impossible

In China, six people hijacked the cable TV airwaves on March 5, 2002, to broadcast uncensored information that exposed a state-sponsored lie; the lie was exposed in two cities for 50 minutes, but at the cost of their lives.

“Defiance in the Kingdom of Fake News,” a mini-documentary recently produced by FalunInfo TV, presents the real story of six Falun Gong practitioners from Changchun, a northeastern city of China, who successfully took over the cable television distribution lines controlled by the Chinese Communist Party (CCP), and broadcasted a series of programs reporting the true facts about the persecution campaign against the faith group for 50 minutes.

The six, known as the “Airwave Six,” include Liang Zhenxing, Zhou Runjun, Lei Ming, Liu Haibo, Hou Mingkai, and Liu Chengjun, all of whom have been tortured to death.

Falun Gong, also known as Falun Dafa, is a spiritual practice rooted in the Buddhist tradition, that attracted 70–100 million adherents by the late 1990s. Practitioners come from all walks of life, from the central government to ordinary families.

Fearing its immense popularity, on July 20, 1999, then-Party leader Jiang Zemin launched a campaign to smear Falun Gong to justify a campaign of violence against them.

Suppression was escalated when a triggering event—a self-immolation event—was staged on Tiananmen Square and later broadcast nationwide by state media.

On Jan. 23, 2001, the day before the Chinese Lunar New Year, five Chinese people posing as Falun Gong practitioners publicly set themselves on fire, which is believed to have been at the direction of the state in order to demonize the group and incite the public against Falun Gong.

On August 14, 2001, the NGO International Educational Development made a formal statement which declared the incident as Beijing’s attempt to slander Falun Gong.

Although western reporters, international organizations outside China acknowledged holes in the so-called “self-immolation,” the truth was not revealed inside China.

“This was the turning point … when police and labor camp leaders lost all remaining restraint in torturing and killing Falun Gong practitioners,” said in the documentary. “For the millions of people who practice Falun Gong across China, it seemed at this point all hope was lost.”

In the northeast of the country, however, a secret plan was afoot in a rented house.

Liang Zhenxing, one of the Airwave Six, recruited the other fellow Falun Gong practitioners with various technical and electrical skills, plotting strategies of broadcast interruption.

On the night of March 5, 2002, using bicycles and cabs to get around, practitioners in official-looking clothes tapped into eight cable channels in Changchun and nearby Songyuan City and broadcast Falun Gong truth-clarification videos simultaneously.

The 50-minute program, without being interrupted, soon shocked the city by reaching out to 300,000 cable subscribers in Changchun. Nearly 100,000 households were able to watch “Self-immolation or Hoax?” and “Falun Dafa Spreads Worldwide.”

Consequently, all six members of the core broadcast team died at the hand of Chinese authorities. Liu Haibo was arrested on the night of March 10 and died a few hours later while in custody.

However, the loss of the six lives was not in vain. In the following months, other groups of individuals in other cities made similar attempts to take over the CCP controlled distribution lines, achieving success in other Chinese cities as well.

An information revolution began that challenged the oppressive CCP regime, had also been launched worldwide.

In 2006, overseas Falun Gong practitioners were inspired to form the Global Internet Freedom Consortium, a U.S.-based alliance of organizations that developed anti-censorship software that helped people break through the Chinese firewall, allowing Chinese people to freely access websites outside of China that the CCP had blocked. It advanced the cause of the freedom of information not only in China, but also Burma (also known as Myanmar), and Iran.

A full version of the story, created by New Realm Studios in Canada, is called “Eternal Fifty Minutes.”