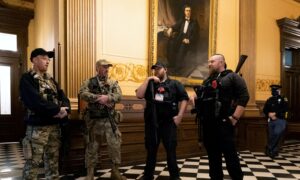 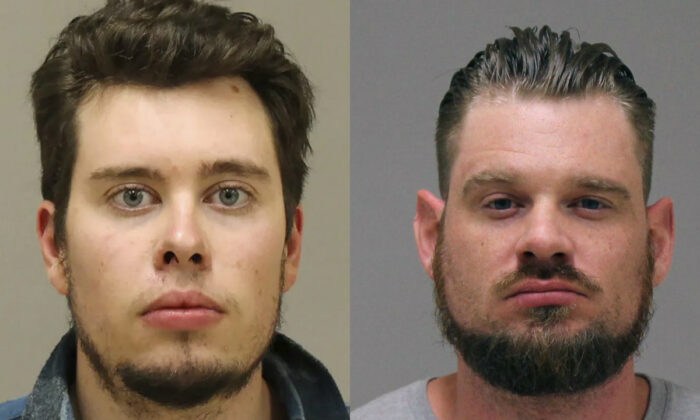 (L) Ty Garbin and (R) Adam Fox, two of the 13 men charged in the alleged plot to kidnap Michigan Gov. Gretchen Whitmer, appeared in court in Michigan on Oct. 13, 2020. (Kent County Sheriff via AP)
US News

Defense lawyers for some of the men charged in an alleged plot to kidnap Michigan’s governor described the men as “military wannabes” who talk a lot but don’t actually follow through on what they discuss.

“Have you ever dealt with big talkers?” defense attorney Scott Graham asked an FBI agent on cross-examination during a hearing in federal court in Michigan on Oct. 13. “There’s kind of a military-wanna-be theme that runs between the militias.”

Kaleb Franks, 26, Graham’s client, appeared in court along with Daniel Harris, 23, Brandon Caserta, 32, Adam Fox, 37, and Ty Garbin, 24, all of Michigan. They all face up to life in prison if convicted of conspiracy.

The judge denied bond for Franks, Harris, and Caserta, and will decide whether to continue detaining Garbin and Fox on Oct. 16.

Magistrate Judge Sally Berens called the plot “clearly very dangerous,” according to The Associated Press, adding, “This is a very, very serious crime.”

According to a criminal complaint filed in federal court, written by FBI special agent Richard Trask, informants and undercover agents were used in disrupting the plot.

At least one spy or undercover agent “was usually present during group meetings,” he wrote, adding that some meetings or conversations were recorded by more than one informant or agent. Certain informants also had access to texts, online chats, and phone calls.

One defense lawyer called the case one of “big talk between crackpots,” describing the men as “people who talk a lot … but are never going to do anything.” Lawyers said the government has produced little evidence so far beyond portions of recorded conversations.

Graham told Trask that the spies and agents “pushed” the men to do illegal things.

“One of the most active leaders was your informant,” Graham said.

The FBI agent in court, under questioning by assistant U.S. Attorney Nils Kessler, said the leader of the group was Fox, who is neither an FBI informant or agent.

Earlier in the hearing, Trask said those who participated in a June meeting in Ohio talked not only of kidnapping Michigan Gov. Gretchen Whitmer but also of abducting Virginia Gov. Ralph Northam.

“At this meeting they discussed possible targets, taking a sitting governor, specifically issues with the governor of Michigan and Virginia based on the lockdown orders,” Trask said.

“Per security protocols for highly-classified information, neither the governor nor other members of his staff were informed. At no time was the governor or his family in imminent danger. Enhanced security measures have been in place for Gov. Northam and his family for quite some time, and they will remain,” Alena Yarmosky, a spokesperson for Northam, told The Epoch Times via email.

Whitmer was aware of the plot and she and her family were moved around, depending on what actions the group was taking, Michigan Attorney General Dana Nessel has said.

During the Oct. 13 hearing, Trask said Fox had told authorities after he was arrested that he was thinking of leaving Whitmer stranded in the middle of Lake Michigan after kidnapping her, which would force someone to have to rescue her.

“Mr. Fox stated his plan or his idea was to take her out on the boat and leave her out in the middle of Lake Michigan,” Trask said. “Disable the engine and just leave the boat around.”