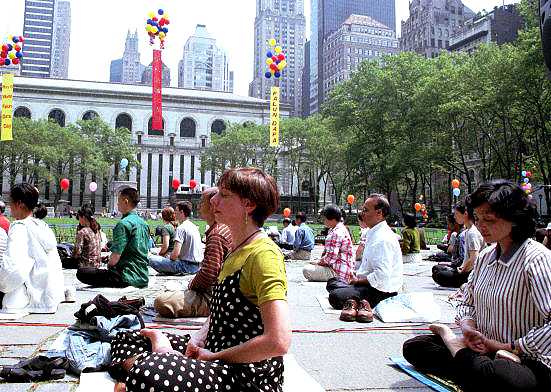 Around 150 practitioners of Falun Gong gathered in Bryant Park in Manhattan on May 13, 2000, for the first Falun Dafa Day. The celebration is now observed worldwide. (Minghui.org)
China

A Global Celebration That Conquers Persecution and Propaganda

In the year 2000 the spiritual discipline of Falun Gong was hardly known outside of China—if anyone in New York City had heard of it, it was most likely in the context of a massive persecution, and hate-filled propaganda campaign, launched by the Chinese Communist Party the year before.

“People didn’t know anything about the practice,” says Alan Adler, executive director of Friends of Falun Gong, a human rights group, and a New York practitioner at the time. Falun Dafa Day was “an opportunity to give a human face to the onslaught of slander that had come from the communist regime.”

A World Falun Dafa Day would most certainly have been realized eventually, Adler said, but the persecution created “a sense of urgency” about it. Since July 20 of 1999, Falun Gong practitioners had been forced to respond to defamation of the most extreme kind, often repeated uncritically in the Western press. Falun Dafa Day was a chance to step back and say what the practice was. “This was a grass root effort to define ourselves,” Adler wrote in a text message.

As practitioners in New York tossed the idea around in late March and early April of 2000, they realized that May 13 was just around the corner: it’s both the date of the birth of the founder of the practice, Mr. Li Hongzhi, and the date that he first taught its five meditative exercises to the public in the northeastern Chinese city of Changchun in 1992.

The observance quickly became a global phenomenon, evolving in the same organic way that the practice itself spread through China and then around the world: no top-down directives, just connections between people.

On May 13, 2000, the first Falun Dafa Day was held in Bryant Park, Manhattan: The smiling faces, sunny weather, colored helium balloons, and 150 or so practitioners meditating to traditional Chinese music was an unambiguous showcase of what the practice was all about.

“The reception was overwhelmingly positive,” Adler says. “A lot of New Yorkers are in a hurry, but many stopped and asked what we were doing, and enjoyed learning about the practice and trying the exercises.”

Wang Cheng, a 31-year-old computer consultant at the time, helped to organize the event.

At one of the group’s informal meetings, “My wife said, ‘Other people are doing this World Taiji Day, why can’t we have a world Falun Dafa Day?’ I said ‘Hey that’s a good idea.’ We brought it up in the meeting the next day and it was settled.”

It was almost a year after the persecution had descended in China—after then-Party leader Jiang Zemin determined that it would be in his political interest to incite a violent, Maoist-style struggle campaign against nearly 100 million Falun Gong practitioners—and Wang Cheng and the others thought it would be “a great opportunity to brighten up everyone’s spirits.”

While most attendees were in neat casualwear, and a number donned the emblematic Falun Gong yellow t-shirts, Wang Cheng dressed in a suit and tie for the occasion, and stood on the makeshift stage to read a poem that he had found on Minghui.org, a Falun Gong website, to the crowd.

“It was to let people know that ‘Hey, we’re not just a bunch of people being persecuted.’ We want to show them that it’s a great practice and worth celebrating with everyone around the world,” he added.

Wang Cheng’s personal experience testifies, he says, to the efficacy of Falun Gong. Before he took up the practice, “I had a severe back issues and elbow issues. My back hurt constantly and my elbow bones would click. When I stretched they’d go click, click, click.” But afterwards, “I don’t even remember when,” the problems evaporated.

More than the mere health benefits, though, Wang Cheng says Falun Dafa brings “inner health, and helps you become a better person. It made me a calmer person. I was calm and benevolent toward others, and tolerant of others’ shortcomings. It made me see things differently, to come out from my own narrow view of things.”

The annual day gives him a chance to show people “how wonderful this practice is, and to have more people who can join us be benefited.”

Over the telephone, Wang Cheng gave an impromptu reenactment of an exchange on that day as he remembered it: “Hey what’s going on here?” asked the passerby. “We’re celebrating Falun Dafa day!” Passerby: “Oh, what’s that, I’ve never heard of it.” Then Wang Cheng tells them all about the moral principles—truthfulness, compassion, forbearance—it is based on, and introduces them to the five meditative exercises that practitioners perform daily. “We tell them what Falun Dafa is and why we’re celebrating: Because it made us all better people.”

Yun Song, a Falun Gong practitioner in New York who often helps to organize events, said that the day “gave a really positive feeling to everyone.” Very often, she said, Falun Gong was thought of in the context of the human rights abuses perpetrated against it in China. “This was a chance to introduce Falun Dafa from a totally different perspective.” Falun Gong and Falun Dafa are interchangeable terms for the practice.

On the same day as New York’s event, practitioners elsewhere around the world held their own Falun Dafa days. Later, photos and messages came from Beijing, Boston, Chicago, Denmark, Edmonton, Tokyo and New Zealand, among many other places.

Though the number of celebrations of the first Falun Dafa was limited to the dozens, according to a search on Minghui.org, in subsequent years the number has regularly been in the hundreds. And while only around 150 people joined the modest event in Bryant Park 13 years ago, celebrations in some places in recent years have become elaborate affairs: day-long events with performances of traditional Chinese dance and song, or colorful parades with marching bands and celestial maidens, sometimes joined by thousands in a single Taiwanese city.

In China, circumstances in 2000 were a little different. Falun Gong practitioners there marked Falun Dafa Day by performing the exercises on Tiananmen Square. They were quickly set upon by plainclothes police, beaten, put into vans, and taken away.