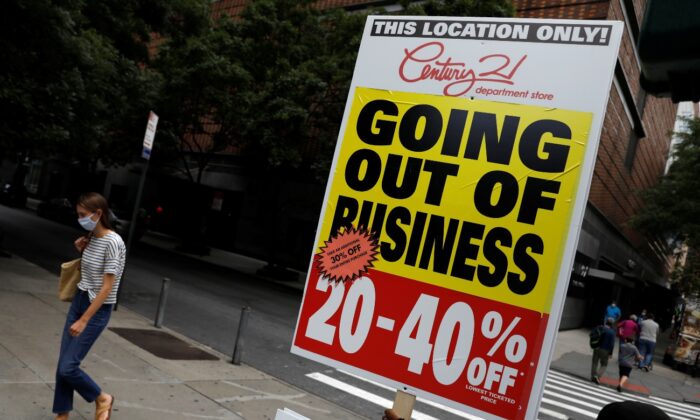 A person holds a sign advertising a sale at Century 21, a retail outlet that announced it was filing for bankruptcy and closing its stores due to the economic impact of the coronavirus disease in Manhattan, New York City, on Sept. 26, 2020. (Andrew Kelly/File/Reuters)
Economy

Default Risks Grow Across Most US Sectors in 2nd Quarter: S&P

The chances of default across a majority of U.S. business sectors rose in the second quarter, according to a new report by S&P Global Market Intelligence.

The study found that every sector, except for financial institutions, posted a higher median market signal—a one-year probability of default score by the end of the April-to-June period—compared with the first quarter.

Health care topped the list at 7.3 percent, up from 4.6 percent. Communication services ranked second, climbing to 4.9 percent from 3.2 percent. Consumer discretionary inched higher, to 3.8 percent from 2.5 percent. Information technology and consumer staples rounded out the top five, at 2.7 percent and 1.7 percent, respectively.

S&P Global Market Intelligence data indicated that the odds of a default in the financials sector eased to 0.2 percent, from 0.3 percent during the January–March period.

The utilities market was at the bottom of the list at 0.2 percent.

“Interactive home entertainment, distributors, and general merchandise stores were industries with the largest decrease in probability of default as of June 30,” the report stated.

During the 12-month period ended March 31, bankruptcy filings tumbled 16.5 percent, according to data published by the Administrative Office of the U.S. Courts. The March 2022 annual bankruptcy filings totaled 395,373, compared with 473,349 cases the previous year.

It had been anticipated that low default rates would rise amid rampant price inflation and slowing economic growth. At the same time, according to George Curtis, a portfolio manager at TwentyFour Asset Management, the default rate will continue to be lower compared with previous economic cycles.

“We do however believe that the default rate will remain low relative to previous cycles (that U.S. estimate from JP Morgan is some 175bp below the longer-term average), and will be primarily localized to companies that have very high levels of energy intensity, limited pricing power, or large exposures to Russia/Ukraine,” Curtis wrote in a May research note.

Last month, Fitch Ratings increased its default forecast for 2023. According to Fitch Senior Director Eric Rosenthal, it could take some time for the number of defaults to become prevalent in the U.S. economy.

“Defaults will take time to materialize as high inflation and slower economic growth adversely affects revenue and margins of speculative-grade issuers that extended maturities and boosted liquidity during the pandemic,” he said.

Although corporate bankruptcies fell to their lowest levels in 13 years in the first quarter, and the U.S. distress ratio sits at a healthy 2.4 percent, filings have started to pick up amid multiple economic pressures, with industrials leading the way. In addition, Fitch Ratings stated in a report this past spring that “downgrades are now outpacing upgrades” by a margin of 1.3 to 1 as positive credit momentum fades amid growing borrowing costs.

The industrial sector, which includes aerospace and defense, construction and engineering, and trucking, has witnessed dozens of bankruptcies. Some of the firms included are MD Helicopters, Guildworks, Scungio Borst & Associates, and Fore Machine.

Meanwhile, the most notable bankruptcy of the year so far occurred last month, when Revlon, the multinational cosmetics juggernaut, filed for Chapter 11 bankruptcy. The New York-based brand became one of the first major brands to do so in the middle of an economic slowdown.

The 90-year-old company had previously averted bankruptcy in 2020 by persuading corporate bondholders to extend its maturing debt. But with enormous levels of debt and a plethora of supply chain challenges, it became too much to handle for Revlon.

Celsius, one of the biggest cryptocurrency lenders, also filed for Chapter 11 bankruptcy in the U.S. Bankruptcy Court for the Southern District of New York.

In October 2021, the company maintained about $25 billion in assets under management (AUM). That number was cut to $11.8 billion in May during the crash in crypto prices. Celsius also possessed $8 billion in client loans. Today, it has roughly $167 million “in cash on hand” to proffer “ample liquidity” amid its restructuring process.

In an interview last month with the Tesla Owners Club of Silicon Valley, Tesla CEO Elon Musk mentioned the possibility of bankruptcy.

“The past two years have been an absolute nightmare of supply chain interruptions, one thing after another,” he added. “We’re not out of it yet. That’s overwhelmingly our concern: how do we keep the factories operating so we can pay people and not go bankrupt?”

Musk noted that the company’s factories in Austin, Texas, and Berlin “are gigantic money furnaces right now,” adding that “there’s a giant roaring sound which is the sound of money on fire,” as these facilities have lost billions of dollars.

Experts contend, however, that companies with strong balance sheets and cash flows can survive the economic turbulence.