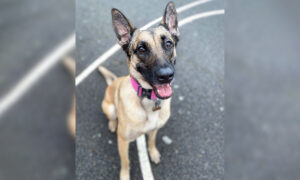 Officer Robert Pratti knows how special it is to have a family pet that is also a working police dog. When he goes on regular patrol shift, his law enforcement buddy goes, too, a German Shepherd called Buca.

At the April town meeting, Deerpark’s town board approved a canine unit managed by Pratti.

Pratti decided he wanted to work with dogs as a young man. “When I was in high school years ago, the troopers brought canines in to do a demonstration,” Pratti says. “And I thought that was just the coolest thing. So when I became a police officer that’s what I wanted to do.”

Buca, whose name in Italian means “mouth,” is Pratti’s third German shepherd and shows promise. Pratti says Buca’s skills are growing since he started working on the force. “He’s intelligent, strong, and has a good sense of smell.”

He has a friendly personality and loves people, according to Officer Pratti. “His best quality is his temperament. He’s very social.”

The canine unit is an important to catch bad people doing bad things or to track people who are lost. Buca is trained in finding narcotics and is an excellent tracker.

“He’s a tracking dog; if someone here gets lost or runs into the woods from a crime scene, he can track them up to, I’d probably say, an hour or two old. I hope to get him even better.”

German Shepherds are a popular breed in law enforcement for good reason. Dogs like Buca are specifically trained to assist police in their work, such as searching for drugs, finding people who are lost or missing, finding crime scene evidence, and protecting their handlers.

“His scent work is good, which goes along with the tracking and finding of drugs. He has very high drive, so he likes to go.”

With his friendly nature, Buca is a perfect fit for community relations. Pratti visits local schools to give demonstrations. He and Buca do walkthroughs in the high school and also participate in lockdown drills. In front of a class, he shows the students what Buca can do. Most like to see a demonstration of how Buca catches suspects.

This goes a long way in strengthening relations between police and the community. “He’s a public relations dog. People love to see him.”

Pratti says his dog knows when to work and when to play. At the end of the work day, he and Buca go home to his family.

Pratti and Buca have a developed a special bond that comes from working together and going through specialized training together. Although there are other breeds used in police work, such as Labrador retrievers and malamutes, Pratti prefers German shepherds. “I’m a shepherd guy.”

Pratti sensed that Buca had the qualities he was looking for in a police dog. They trained five months at a canine academy in Newburgh when Buca was a puppy. To maintain and improve Buca’s skills, they do re-training twice a month.

New York’s canine unit began in 1975, according to the New York State Trooper website, to train dogs in detecting explosives during the 1980 Winter Olympics in Lake Placid. The work that police dogs do today has expanded into search and rescue and narcotics detection.

Buca is his third police dog and Pratti wanted to train him well. “Once you get used to having a really obedient dog, you realize the work that goes into it, and you really want to train your other ones like that,” he said.

One of Buca’s more popular tasks is visiting schools to meet the children. Officer Pratti makes regular visits to the elementary school in Deerpark and Port Jervis High School.

Although Buca is very friendly, Pratti does not encourage petting. He says no handler wants an accidental bite, which might happen when a K-9 is on the job.

Most K-9s can work for around eight years. Buca is 2 1/2 and Pratti expects to have his dog on the job for another six years.