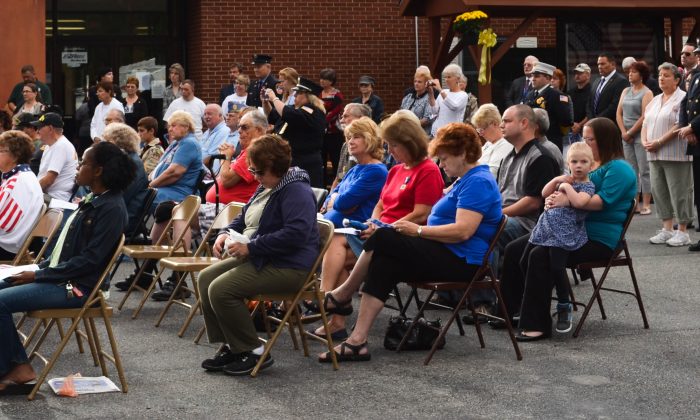 The Town of Deerpark remembered the events of 911 in an outdoor service at the town hall on Sept. 11. An honor guard of police from Deerpark and Port Jervis presented the flag to open the ceremony, followed by a polished a capella rendition of the Stars Spangled Banner by members of the Port Jervis High School a capella choir.

State legislator Tom Faggione said it was a time to pause to honor those who lost their lives 14 years ago. “We are a nation of one people and that, no matter what tragedies or terrorists could ever try to do to us, we will always survive as a nation.” Faggione said the day had special significance to him because he was born in New York City.

Many members of various fire departments attended in full dress uniform. Jim Christopher of the Sparrowbush Fire Department and a Vietnam veteran said he was part of the fire truck contingent that escorted a piece from the twin towers wreckage to the entrance of the Deerpark town hall.

Krentz visited the 9/11 memorial in New York City and said it was not a peaceful feeling to be there.  It was “just somewhere to take your thoughts.”