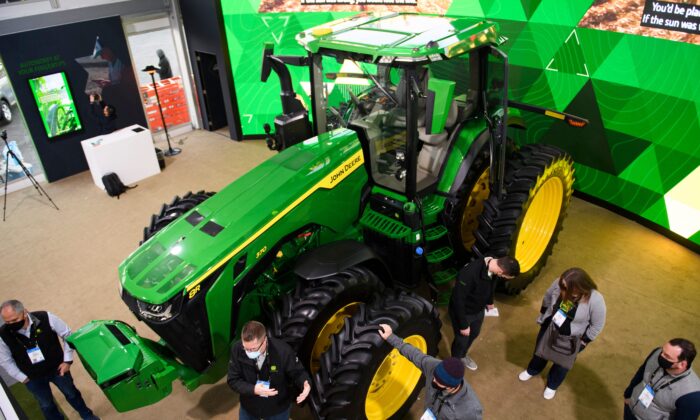 Deere & Co. raised its annual profit forecast on Feb. 18, after posting a net income of $903 million in the first quarter, beating earlier estimates.

The farm equipment manufacturer expects a margin boost from price hikes and solid demand for its tractors and equipment.

It appears that there will be plenty of demand for agricultural equipment this year, as farmers are flush with earnings from high grain prices and government stimulus money during the CCP (Chinese Communist Party) virus pandemic.

However, much of this is offset by soaring costs for seeds and fertilizers due to the supply chain crisis.

Net farm income is estimated to have risen 25 percent in 2021, but it may fall 4.5 percent this year, according to the U.S. Department of Agriculture.

The company had earlier dealt with a five-week United Auto Workers (UAW) strike, which contributed to inefficiencies in certain factories and higher production costs.

It also paid its UAW workers a contract ratification bonus of $90 million after agreeing to the new contract in early 2022.

“Deere’s performance in the first quarter was impressive given production issues surrounding the delayed ratification of our UAW contract in late November as well as persistent challenges posed by the supply chain and pandemic,” John C. May, chairman and chief executive officer of the company, said in a statement.

“These factors led to higher production costs in the quarter. We continue to work closely with key suppliers to manage the situation, enabling our customers to deliver food production and critical infrastructure,” he continued.

“We are proud of the extraordinary efforts being taken by our dealers and employees to get products to our customers as soon possible in today’s challenging environment,” said May.

Deere also raised equipment prices to combat rising shipping and supply chain costs, but it appears to not have affected demand, as the company said it is fully booked with orders for its farm equipment in 2022.

Deere also announced on Feb. 18 its new sustainability project called Leap Ambitions, which is linked to its Smart Industrial strategy and operating model introduced in 2020.

The company said that the program is designed “to boost economic value and sustainability for Deere’s customers, as well as for employees, investors, and other stakeholders,” and that it is committed to “achieving these goals over the remainder of the decade.”

Net sales from equipment operations rose about 6 percent to $8.53 billion for the first quarter of 2022.

“Looking ahead, we expect demand for farm and construction equipment to continue benefiting from strong fundamentals,” said May.