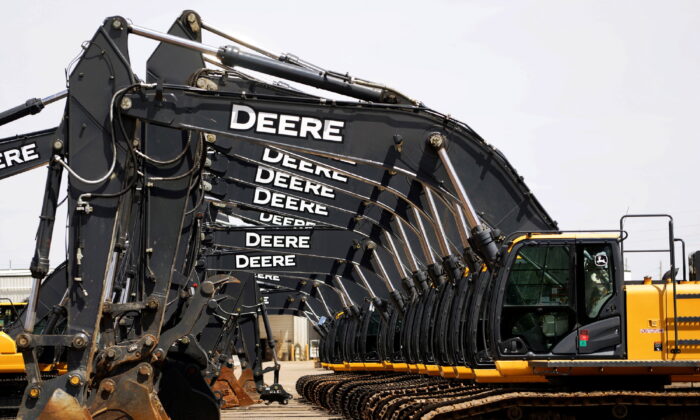 Equipment for sale is seen at a John Deere dealer in Denver, on May 14, 2015. (Rick Wilking/Reuters)
Companies

The Moline, Illinois-based firm forecast fiscal 2022 net income, including special items, of $7.0 billion to $7.4 billion, from a prior estimate of $6.7 billion to $7.1 billion.

Shares in the world’s largest farm equipment maker, which surged to record highs in March as investors bet on stronger demand, were down 6 percent in pre-market trading against the backdrop of a weaker market triggered by a lackluster earnings season and a hawkish stance from the U.S. Federal reserve.

The S&P is down nearly 19 percent year-to-date.

Deere’s performance has largely outpaced the general market as a tight supply of grains has lifted prices, supporting farm incomes and encouraging farmers to upgrade their fleet.

The company said that total net sales and revenue rose about 11 percent to $13.37 billion from $12.06 billion in the quarter, while net sales for its production and precision agricultural solutions saw the biggest increase, up 13 percent from the year before.