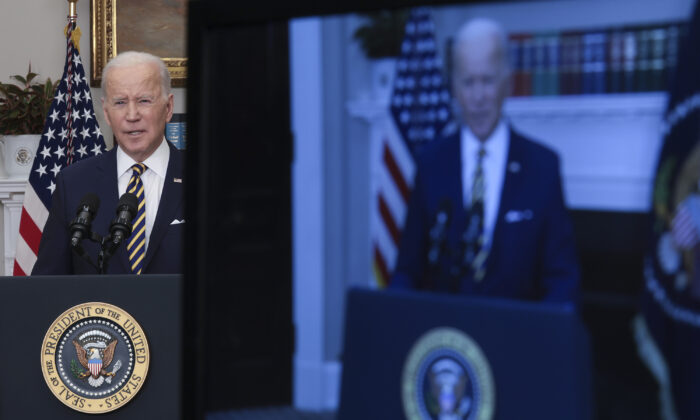 President Joe Biden speaks in the Roosevelt Room of the White House in Washington on March 8, 2022. (Win McNamee/Getty Images)
Viewpoints

Deeper and Deeper in Debt

In his State of the Union address, President Biden claimed he would, be “the only president to ever cut the deficit by more than $1 trillion in a single year.” While this is technically true, he ignores the fact that the reduction in the deficit will be due to the decreased expenditures associated with COVID-19 relief.

Meanwhile, the debt will continue to rise because members of both parties refuse to control spending. The House last week passed a $1.5 trillion spending bill that is more than 2,000 pages long. Experience teaches most members have not read all, or even most of it. Why should they? They aren’t spending their money.

Yes, and war is peace.

Remember earmarks, those little and big add-ons to spending bills that Republicans once banned and promised voters they would never return? They’re back, with some Republicans inserting them into the spending bill. Earmarks reportedly take up 367 pages of the bill.

Social programs, which are never measured by their success or failure, are part of this spending monstrosity. To get more for defense, as a Wall Street Journal editorial noted, “Republicans had to concede to more domestic spending on top of the $3.4 trillion spent in the last year.”

This irresponsible spending continues because of a philosophical shift among American citizens. Where once people were expected to be responsible for themselves and turn to government as a last resort, now mostly—but not exclusively—liberal politicians have succeeded in convincing too many Americans they are “entitled” to “benefits” and that “the rich” aren’t paying their “fair share” in taxes.

In fact, the federal government has once again collected a record $1.86 trillion in total taxes through the first five months of fiscal 2022. Revenue is not the problem. Spending that has given us a $30 trillion (and counting) debt is the problem.

We can’t say we haven’t been warned about what uncontrolled debt can do to nations. People have sounded alarms about government debt.

As Peter Wehner and Ian Tufts write in the winter edition of National Affairs about recent presidents who expressed concern about our growing debt: “In issuing their warnings, these presidents echoed mainstream economists, budget directors, chairmen of the Federal Reserve, and influential figures in the world of finance — both Democratic and Republican — who sounded the alarm about the potential consequences of a dramatic fiscal imbalance. These experts warned that large annual deficits and debt could lead to troubling, even catastrophic, consequences: prolonged recessions, rising interest rates, increasing inflation, reduced upward mobility, a weakened dollar, a plunging stock market, a mass sell-off of foreign-government holdings of U.S. Treasuries, a collapse of the financial system, and general economic and social calamity. These would all grow more likely, they cautioned, if the federal government failed to get its fiscal house in order.”

Like so much of the Constitution, the left and too many on the right, have ignored history and sage advice when it comes to the economy. We are doomed to repeat that history unless we get our economic house in order. That will require more Americans taking a pledge to care for themselves and rely less on government and it will mean electing people who will heed the warnings and advice of the people quoted above.

I am not optimistic such advice and experience will be heeded, given human nature. Many would rather get a check than earn one.