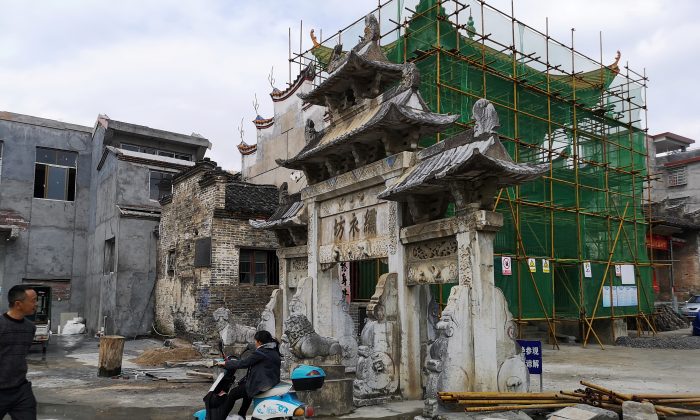 A woman rides a motorcycle past an imperial-style arch and a building under renovation in Rucheng county, Hunan Province, China on Dec. 3, 2018. (Shu Zhang/Reuters)
China Business & Economy

RUCHENG COUNTY, China—In the heart of an impoverished village in southern China, a life-sized statue of Mao Zedong sits on a platform adorned with intricate stonework, flanked by a diorama of Red Army soldiers and traditional brick-and-tile homes with curved roofs.

Officials have spent a small fortune on the project that has transformed the village of Shazhou, in Hunan Province, into an open-air museum dedicated to the Chinese Communist Party. But few tourists have come to peer at the inscription at the foot of Mao’s statue, or take selfies in front of the heroes of the revolution.

The “red tourism” project was the brainchild of the former Communist Party chief of the local county, Rucheng, and cost 300 million yuan ($44 million). But it has yet to produce a profit, just like the string of public gardens, town squares and office buildings that the county has built in recent years.

Now the clock is ticking as Rucheng, among China’s poorest counties, and with a population of just 420,400 people, is under pressure to resolve $1 billion in debt, following a decade of credit-fueled vanity projects, three local officials told Reuters. They requested anonymity due to the sensitivity of the matter.

To raise funds and conserve cash, Rucheng—which doesn’t have a train station or an airport—has been slashing public investment in infrastructure projects and increasing government land sales to generate revenue, the officials said.

Rucheng is not alone—hundreds of other indebted counties in China are in the same boat. In a recent financial stability report, the central bank said that much of China’s hidden debt risk is held at lower-tier levels, meaning prefectures and counties like Rucheng.

As China prepares this month to celebrate the 40th anniversary of the economic reforms that transformed it into the world’s second-largest economy, fears over local government debt are growing.

China’s local governments had 18.4 trillion yuan of outstanding debt at the end of October, and were estimated by S&P Global Ratings to have up to 40 trillion yuan in off-budget borrowing.

Of particular concern to the authorities as they tackle risks in the financial system are those governments with tiny revenue streams relative to their debt. Their over-reliance on income from land sales is also driving asset bubbles in China.

Rucheng’s free-spending ways came onto Beijing’s radar this year when visiting inspectors were shocked by the contrast between the county’s newly built but deserted municipal district and cramped older areas where residents drink polluted water from aging pipes.

When the inspectors were in town, numerous anonymous complaints arrived in the mail.

Since 2008, Rucheng has spent billions on 10 office buildings, 11 public gardens and squares and 26 urban roads, the inspectors found. But less than 6 percent of government spending went on investing in industry.

The head of Rucheng’s Communist Party was sacked for profligate spending and “ignoring the livelihood of the local people.”

Since the anti-corruption inspection, Rucheng has suspended, canceled and scaled back 79 government projects, cutting investment by 2.1 billion yuan, the officials said.

All Rucheng officials have been working seven days a week and meeting regularly with local residents, the three officials said. One official died from overwork, they added.

More than 30 million yuan is also being spent on renovating old water pipes in the area.

To resolve the debt problem, Rucheng has to repay 400 million yuan a year in principle and interest to reduce its outstanding government debt, which was around 9 billion yuan at the end of 2017, an official at Rucheng’s finance and debt department told Reuters.

Rucheng’s debt ratio has since dropped to about 60.6 percent, said the official at its finance department. On Dec. 5, the provincial government lowered Rucheng’s government debt warning level from “first-level” to “second-level,” the officials said.

At the same time, Rucheng officials are under pressure to produce economic growth.

“The higher authorities require us to have zero additional debt but deliver high-quality economic growth,” said a Rucheng official in charge of the economy.

But the legacy of the vanity spending remains.

A mineral bath tourism spot in Rucheng was deserted during a recent visit by Reuters.

Local residents washing vegetables and boiling eggs in the hot springs said the tourism spot, which had cost about 400 million yuan to build, had done little to improve livelihoods.

In nearby Shazhou, which has a population of 500, residents said they had been pressured to sell land at bargain prices to the government for the red tourism project while getting paid only 100 yuan a day as construction workers at the site.

White elephant projects built by local governments proliferated across China after the central government pumped trillions of yuan into the economy during the 2008-2009 global financial crisis.

Beijing has since tried to curtail direct borrowing by local governments for such projects, but officials have found ways around the curbs. One widespread method has been the establishment of shell companies known as local government financing vehicles to obtain funds for infrastructure and real estate projects, from which local officials often can profit.

Rucheng had nine such financing vehicles until recently, said the Rucheng finance official, adding that the number had now been cut to two. More than 1 billion yuan in debt was disposed of in that restructuring, he said.

Rucheng still has another 1.4 billion yuan of “mid- to long-term payment obligations,” which will take Rucheng 10 years to repay, the official said.

Despite Rucheng’s large debts, the officials said the county’s 5.36 billion yuan in government bonds presented “no default risk” because they would keep issuing so-called refinancing bonds to roll over the debt.

The crackdown by Beijing in Rucheng was not only painful for local officials, but it also threatened a fragile local economy that is comprised of agriculture, green industries and eco-tourism.

Like other places in China, Rucheng needs to develop its private sector and new industries to counter a slowing regional economy at a time when government investment is severely constrained, the officials told Reuters.

There are signs that some private capital is entering Rucheng.

In September, the Dongguan Electronic Industry Association in Guangdong signed a 10 billion yuan investment plan to create an industrial park in Rucheng, attracted by cheaper land and labor costs.

That would bring in at least 20 mid-sized electronic firms and create 10,000 local jobs, Guo Peng, manager of the association, told Reuters.

But for Rucheng officials, the fear of being punished for increasing government debt risks has extinguished much of their desire to chase higher economic growth.

Rucheng indicated in August that its growth target for the region would be cut to 8 percent from 10.5 percent.

“We are not taking on any new debt illicitly for construction,” said an official at the county’s Communist Party. “If a local administration raises debt in violation of central government policy, local officials will be held responsible for their entire life.”