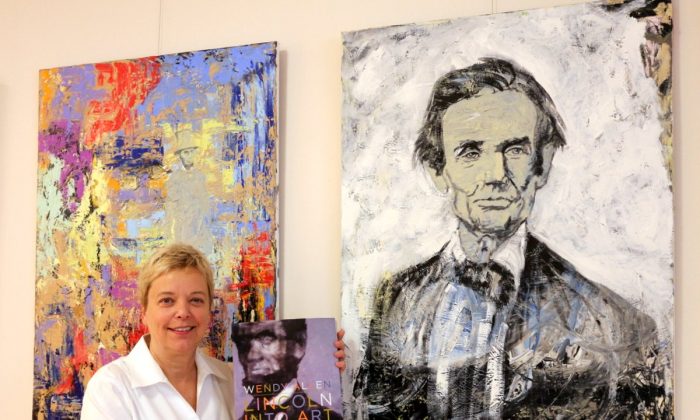 Wendy Allen standing with her paintings of Lincoln. Her new book is entitled LINCOLN IN ART. (Myriam Moran copyright 2013)
News

Dedication to the Arts

Arts are not to be confined to staid museums where visitors find static displays. Hung in halls in huge, cost-ineffective municipal and private edifices subsidized by the very wealthy whose collections end up as tax deductions in carefully guarded bastions. Art, to be properly enjoyed, needs a happy venue and a personal relationship with the artist.

Adams County, Pennsylvania is a mostly agricultural area with farmland and rolling hills, forests and mountain streams. It is where the momentous Civil War Battle of Gettysburg was fought in July 1863. There are hamlets and villages that offer crafts, farmer’s markets, vineyards and wineries. It is a good place to relax, hike over battlefield trails, throw a fishing line in, browse country shops and antique stores and enjoy the arts.

The Adams County Arts Council dedicated a new building to the arts on Washington Street in Gettysburg. There are art classes, youth programs, exhibits, jewelry making courses, celebrations of the arts. As part of the Gettysburg Festival the Center highlighted watercolors of Eloise Bralove, 1921-2009. Bralove, lived in the Smokey Mountains of North Carolina. In later years she devoted herself to Chinese watercolor painting on rice paper. She studied under Liu Shih Min in Washington DC then under master Liu-Sang Wong of the Lingnam School.

“My mother worked to perfect the Four Gentlemen, the four basic brush strokes. They are called the orchid, bamboo, cherry blossom and chrysanthemum,” Bralove’s daughter, an artist in her own right, Barbara Ebaugh said.

“She was 45 years old when she went to a demonstration by Liu. She wanted to capture moments in nature. She came away from the demonstration concluding, ‘I want to be able to do that,'” Barbara added.

Eloise Bralove learned the art of painting on rice paper. It is not an easy technique as her daughter described it, “I have so much rice paper left, I try to use it. It is like painting on wet Klenex tissue. Mother went with Ling to master the basic strokes. Once mastered Chinese artists just copy. It’s so much fun when you get the Four Gentlemen down. Take the orchid leaves, you do those for years until you get them right. You figure how wet the rice paper is. The background is done after the painting is done. You start with bird beaks, then the eye then the bill. When that is done you fill in the background. Every paper is different,” Barbara explained.

“Chinese water colors come in a block. You grind them down in a mortar and pestle and mix in water. It is just as easy to use American tempura. Mother’s gallery was in Rockville, Maryland in the 60s and 70s. She had a Chinese partner,” Barbara concluded as visitors to the Center admired her mother’s work.

In another room in the Center, accomplished artist Wendy Allen displayed her oils. She was autographing her new book that highlights a hundred of her paintings. Wendy has her own gallery in Gettysburg. She specializes in painting Abraham Lincoln. When asked why she chose painting Lincoln, Wendy looked at one of her recent oils and said, “He’s got a great face. I can’t stop painting him. His face is complicated. I started thirty years ago. I got my first job in San Francisco when I was 25. There was art all around the city. I wanted to try it. I was broke so scavenged materials. I got old house paint. I visited my sister here in Gettysburg. I went back and spray painted Lincoln. I got good comments about it so never stopped.”

Wendy Allen hung two portraits of Lincoln side by side at the Center. “This is an oil on linen, the other oil is on canvas. I like to experiment with different surfaces. I layered oil on the canvas, started with red and orange. Every other color let those come through. It is the seething, pained Lincoln. This on linen is young Lincoln. It is from a famous photograph. Lincoln was wearing a white linen shirt. He was sweaty and dirty and he didn’t want to pose for the photograph but he did pose,” the artist explained.

“This one, Lincoln at the train station, it is still not dry. It is in Gettysburg as Lincoln is leaving the train station to deliver his Gettysburg Address. I thought like a kid, looking up and seeing Lincoln, and thinking, ‘Oh he looked at me.'” Wendy’s new book “Lincoln Into Art,” depicts a hundred of her more than 204 Lincoln paintings.

Not far away Larry Selman displayed his art at the Gettysburg Frame Shop art gallery. An affable artist from Waynesboro, PA, his business card reads, ‘Artist of the American Warrior.’ An oil on canvas depicts a paratrooper landing over a church in Normandy. The dramatic World War II scene is so famous that the landscape is immediately recognizable.

The Selman painting is a history lesson as much as an art rendering of the moment. “It was the 505 of the 82nd Airborne. They were pathfinders. There was confusion at the jump. The planes dropped them at 150-200 miles per hour instead of slowing down. One paratrooper was killed. John Steele was hung up on the back side of the church against the roof. The Germans opened a trap door in the roof and took him prisoner. They wanted to surrender to the Americans and thought by rescuing him they would be treated favorably,” Larry explained.

His painting was still drying. When it is ready it will be displayed at the Airborne Museum in Ft. Bragg, NC. “I titled it St. Mer Eglise. Just finished it three days ago. I made cardboard houses and trees in my basement. I could walk around the mock up and take the angle I liked. The site is different today. A house is there now that wasn’t there in 1944. There was a fire in a barn next door. That accounts for the light against the church. You see people running with buckets trying to put it out,” Larry explained.

His paintings depict the American Revolution and military scenes. “I did GI Joe toys for eight years. Whatever I put in a box I wanted done right. Then I got into history and film history. I did this ‘Code of the West’ for a book cover. I had to keep changing the girl models. The author didn’t like them. He kept saying they weren’t old enough. That may be realistic but people want to see beautiful young girls on a cover. This is a print. I sold the original years ago for $2,500.” Larry’s work was featured in the Frame Shop on Chambersburg Street.

A large oil on canvas depicted soldiers of the American Revolution. “They walked 600 miles in 24 days. The painting will go to the West Virginia National Guard to be displayed in the state capital.” Selman’s interest in history is evident in his art. He paints accurate details based on his research. “I painted flowers for thirty years. I got bored doing the same thing over and over,” he laughed.

During the Gettysburg Festival the large auditorium of the main fire station in town was turned into a reception hall and display gallery. More than thirty artists and artisans from around the country came to exhibit their works and demonstrate their craft. Chef Claude Rodier from the Wyndham Gettysburg Hotel and Chef Joseph Holmes from the Gettysburg Hotel prepared delicacies for a sampling. Local wineries offered their vintages to compliment the food.

Janene Millen, in period dress, played a mid-1800 Appalachian dulcimer. “The dulcimer was brought over by German immigrants. Melody is played on two strings the other three are drones,” she explained as the music added to the comfortable setting.

Tim Sanner from Rockwood, PA brought his hand made powder horns and tinder boxes. In 1994 a friend brought Tim a cow horn. “Make yourself a powder horn,” the friend told Tim.

“It all went to crap after that,” Tim laughed. His tools were out and he was working a scrimshaw piece on one of the horns..

“I’ve made over a thousand. I do a lot of history reenactments and shows. It’s not hard to do. I just started this one this afternoon. All my designs come from the 1700s. I have several books of designs. This one is an 1809 sun design,” he explained.

Tim donates powder horns that are auctioned for charitable events. He opened a magazine that had a picture of one of his horns made for the Long Rifle Association.

“This is a copy of Daniel Boone’s powder horn. This other horn has a panel clear as glass,” Tim lifted a horn and showed its wooden base that had a clear insert. The owner can view powder inside the horn through the thin horn panel. This is a ladies talcum container. These are for flint and tinder to start a fire,” Tim explained.

The process was not as easy as Tim said. Filing then smoothing a cow horn, then shaping and making the end caps and threaded ends, using scribes to carve scrimshaw into the horns and filing them with waterproof India ink requires a skilled hand and artist’s eye. “I have to get all the scratches out or the ink will fill them in,” this artist in horn said, willing to share his craft with visitors.

Many artists shared gallery space at the King James Gallery on Baltimore Street and Lord Nelson’s Gallery on Chambersburg Street. Wineries set up tables inside the galleries, offered samples of their vintages and explained how they were made. Executive Chef Kyle Ensor from Herr Ridge Inn, Chef Josh Fidler of the Garryowen Irish Pub, Chef Terry Shaffer of the Fairfield Inn, Owner Allison Giles and Chef Brad Cochran of the Blue Parrot Bistro all presented their specialties for sampling. Participating wineries included Reid’s Orchard, Hauser Estate and Adams County Wineries.

Art is all year around in Gettysburg and surrounding Adams County. There are covered wooden bridges, antique barns, landscapes, inspiration from the battles fought, churches and orchards, streams and people. Lots of people. Some 4 million visitors come through town every year. Despite the large number of tourists, it does not seem crowded. Traffic yields to pedestrians as street fairs and food events take place. The Gettysburg Festival is prelude to battle reenactments that take place in June and July every year. It is a special time; then any time is special in this historic place.