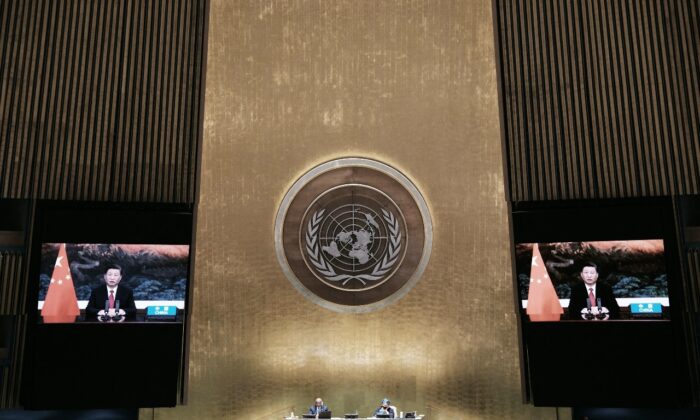 Xi attempts to reinforce the legitimacy of the Chinese regime

Chinese leader Xi Jinping gave a speech at a conference in China on Oct. 25 to mark the 50th anniversary of the admittance of the People’s Republic of China (PRC) to the United Nations.

The speech was directed at U.N. Secretary General Antonio Guterres who attended the conference virtually, as Xi has not traveled outside the PRC for over 21 months.

In the run-up to that speech and afterward, state-run Chinese media—such as Xinhua, Global Times, China Daily, and People’s Daily—gushed with laudatory headlines:

What are the messages that the Chinese Communist Party (CCP) seeks to convey to the world vis-à-vis the PRC and the U.N.?

The agitprop narrative includes the following points that are endlessly repeated by Xi, Chinese diplomats, and Chinese state-run media:

And sure enough, Xi’s speech included these same tired lines that he has repeated so many times before. A deciphering of each statement is provided.

The motives of Xi and the CCP are transparent.

First and foremost is their insatiable desire to confer legitimacy on the Communist Party and the PRC. This is especially important for the Chinese domestic audience, as the CCP maintains control of the Chinese government through force, not through the will of its people via democratic elections. Foreign recognition of the PRC reinforces that the Chinese regime is “legitimate” in the eyes of the world, and by extension should be supported by the Chinese people at all times and in all places. That is the reason for the CCP stressing the “lawful restoration of the PRC’s rights” through U.N. recognition 50 years ago.

Secondly, the CCP seeks to leverage that conferred legitimacy in their strategy to achieve geopolitical and economic domination of the world, with the U.N. being one of the instruments to be exploited for that purpose. CCP subversion of the U.N. since 1951 has played an important psychological and propaganda role in reshaping world opinion about the United States, which includes the following examples: the subversion of the “non-aligned movement” (which now supports many of the CCP platitudes contained in Xi’s speech); the World Health Organization’s role in being complicit in China’s coverup of COVID-19; and the continuing penchant for “multilateralism”—with the PRC’s support for the latter “confirmed” just this past Monday by Abdulla Shahid, the president of the U.N. General Assembly. Shahid also confirmed the PRC’s successful subversion of the U.N. in making that remark! Xi’s speech on Monday was a continuation of that psychological warfare through an offer of Chinese leadership in all future endeavors “for the benefit of mankind” in a “shared future” dominated by the CCP.

CCP legitimacy, as conferred when the PRC was admitted to the U.N., is a precious commodity continually sought by Xi Jinping and his underlings. Monday’s speech commemorating the PRC’s admission to the U.N. in 1951 was the latest attempt at reinforcing that legitimacy. The other purpose of Xi’s speech was to continue the psychological warfare against the United States in the CCP’s pursuit of world economic and geopolitical domination. What better (virtual) venue for the speech than the U.N., which has become a de facto instrument of CCP policy? That commemorative speech was unusual. What other countries celebrate the anniversaries of their entrance to the U.N. with major speeches by their respective leaders? If anything, many Americans would celebrate the United States leaving the U.N. if that day ever comes.