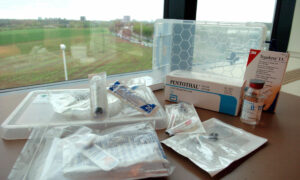 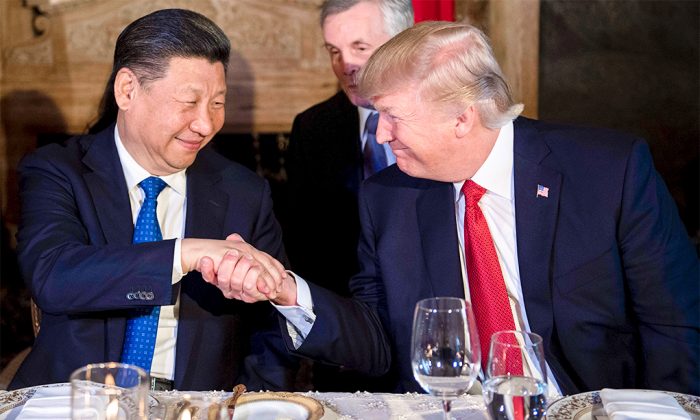 On the presidential campaign trail, Donald Trump promised to get tough with China on currency and trade issues.

President Trump, however, appears to have changed tack after a meeting with Chinese leader Xi Jinping. He tweeted on April 16: “Why would I call China a currency manipulator when they are working with us on the North Korean problem? We will see what happens!”

Trump has since been criticized by several mainstream news outlets for softening his stance on the Chinese regime.

But a close parsing of Trump’s comments to the media on the regime and Xi may suggest that Trump recently gained some insight into the delicate political situation in China. This insight, and the Xi leadership’s prompt actions against North Korea, could have convinced Trump to hold off on rebuking Xi.

Xi and Trump announced at the conclusion of a two-day U.S.–China summit in Florida that they had established a good understanding of one another. “We were together hours and hours and hours by ourselves,” Trump told “Fox & Friends.” “We had a 15-minute scheduled meeting, and it lasted for three hours. And the same thing happened the next day.”

The six hours of private talk time—or somewhat less, considering breaks and translation time—would be sufficient for Xi to give Trump a decent breakdown of the challenges he faces from a rival political faction headed by former Chinese Communist Party leader Jiang Zemin.

Jiang Zemin and his faction continue to undermine the Xi leadership.

Jiang was Party leader from 1989 to 2002 and remained a powerful backroom presence during the tenure of his successor, Hu Jintao (2002–2012). Jiang’s time as the paramount political force in the Chinese regime was marked by corruption, kleptocracy, and persecution.

Jiang was not just influential in mainland China. Semiautonomous Hong Kong is considered a political fiefdom of Jiang, while Jiang and his top lieutenants have close ties with the Kim regime in North Korea.

Xi has been trying to eliminate Jiang’s faction and consolidate his control over the Chinese regime since becoming Party leader in 2012. Xi’s anti-corruption campaign has seen the downfall of many key Jiang allies and supporters. In October 2016, Xi took on the politically symbolic title of Party “core” leader (one given to only a handful of top leaders, such as Mao Zedong), effectively displacing the previous “core,” Jiang Zemin.

Jiang, however, remains at large, and his faction is down but not out.

Associates of Jiang hold important portfolios in the Politburo Standing Committee, the regime’s top decision-making body. Key governing organs, such as security and propaganda, still largely follow Jiang’s directions. And growing tensions in Hong Kong and with North Korea over its recent nuclear provocations are phenomena that the Jiang faction could very well have a hand in manipulating.

If Xi has indeed informed Trump about the internal problems he is facing, that would put into perspective Trump’s comments to various media outlets about the Xi leadership’s efforts to rein in North Korean leader Kim Jong Un.

“After listening for 10 minutes, I realized it’s not so easy,” Trump told The Wall Street Journal, adding that he “felt pretty strongly” that the Xi leadership had “tremendous power” over North Korea. “But it’s not what you would think,” he said, hinting at complexities between the two communist regimes.

A Kim regime that is close with Xi’s chief rival would certainly not be easy for Xi to bring in line.

In the interview with “Fox & Friends,” Trump said: “China is trying to help us. I don’t know if they’re going to be able to or not.”

Presuming that Trump is aware of the factional struggle in the Chinese regime, it would make sense for him to not immediately label China as a currency manipulator, a move that the Jiang faction would almost certainly use against Xi.

Without pressure from the United States, the Xi leadership could then focus its efforts on tackling the Jiang faction.

And without the Jiang faction as political backers, the North Korean regime might not be willing to so recklessly advance its nuclear program, as it has in recent months.

A possible long-term resolution to the problem of North Korea might not be the only thing that has shifted Trump’s perception of China and Xi.

Xi promised Trump in Florida that he would resolve a prominent human rights issue in China.

Xi promised Trump in Florida that he would resolve a prominent human rights issue in China, The Epoch Times learned from a source in Xi’s inner circle.

“I believe lots of very potentially bad problems will be going away,” Trump said at the conclusion of his meeting with Xi. Whether this refers to North Korea, the “prominent human rights issue,” or something else entirely is not clear.

Secretary of State Rex Tillerson, when asked during a press briefing whether human rights were discussed during the summit, said, “As to the discussions around human rights in China, I think America’s values are quite clear and they really occupied a core of all of our discussions.”

The Chinese regime’s suppression of practitioners of Falun Gong, the most severely persecuted group of prisoners of conscience in China today, has somewhat lessened during Xi’s tenure.

Jiang launched the persecution of Falun Gong on July 20, 1999. For nearly 18 years, practitioners have been arrested for their faith and subjected to brutal torture and abuse that in some cases led to death. Researchers of organ harvesting in China find that practitioners form the bulk of prisoners of conscience who have had their organs forcibly removed by the Chinese regime, a number believed to be in the hundreds of thousands.

One of Xi’s first actions in office was to order the dismantling of the labor camp system, whose inmate population was at one point half Falun Gong practitioners, according to reports cited by the U.S. State Department and the Congressional-Executive Commission on China. Also, high-ranking officials overseeing the anti-Falun Gong campaign have been purged on corruption charges. In 2016, Xi ordered the Chinese paramilitary to cease its private business ventures, including for its hospitals, which are key sites of organ harvesting.

Should the Xi Jinping leadership end and expose the persecution of Falun Gong, it could also inspire further political change given the severity of the crimes committed by the Communist Party, the huge number of Chinese affected, and the inevitable impact on the Party’s image.

For President Trump, there is much to be optimistic about. In appearing to renege on campaign promises, he may help to bring about the end of a brutal persecution, and perhaps even communism, in China.