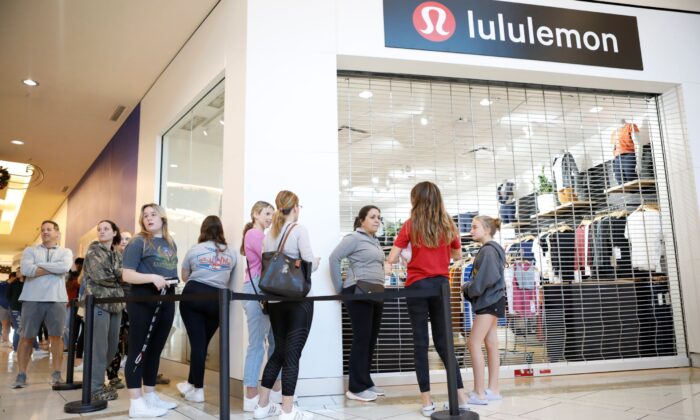 Shoppers form a line outside of Lululemon at International Plaza in Tampa, Fla., on Nov. 26, 2021. (Octavio Jones/Getty Images)
Economy

U.S. retail sales fell a seasonally adjusted 1.9 percent in December, as inflation and supply issues weighed on prices, according to a Jan. 14 report from the Commerce Department.

A surge in COVID-19 cases because of the Omicron virus variant also was indicated as a factor for the decline in consumer confidence, as well as the higher prices.

Analysts had predicted a drop of just 0.1 percent. However, even with the disappointing results for December, sales for all of 2021 were up 19.3 percent from 2020, according to the report.

Weak online holiday sales were responsible for much of the slide, tumbling 8.7 percent for the month.

There was also a fall in spending on outdoor dining, which posted a 41.3 percent annual gain for the year.

The price surges hit following trillions of dollars in U.S. government stimulus spending, which injected cash into the economy during the pandemic.

Meanwhile, there was some positive news in other sectors of the U.S. economy last month.

Discount store merchants and sellers of building and gardening materials recorded an increase of 1.8 percent and 0.9 percent, respectively, as customers have begun growing their own food to sidestep grocery shortages and inflated prices.

A Jan. 14 Labor Department report showed a 0.2 percent downturn in import prices for December, the first since August; an increase of 0.2 percent had been predicted.

The decline in import prices was mainly due to a 6.5 percent decrease in global oil prices.

Gasoline prices declined 0.5 percent last month to close out a year when prices at the pump skyrocketed 49.6 percent from the year earlier.

U.S. manufacturing output dropped 0.3 percent, the first decline since September, as supply chain issues continue to affect output, according to the Federal Reserve.

Industrial output fell 0.1 percent in December, after a 0.7 percent gain in November, while industrial capacity slipped to 76.5 percent last month from 76.6 percent the prior month.

The consumer price index rose 0.5 percent for December 2021, which showed a 7 percent increase from 2020, the highest price gain since June 1982.

Federal Reserve officials have been stressing the importance of heading off inflation, with multiple policymakers saying they expect interest rates to rise as soon as March.

Christopher Waller, a Federal Reserve board member, said on Jan. 12 that the Fed may carry out three to five interest-rate increases this year to address the worst inflation seen in 40 years.

President Joe Biden, meanwhile, has placed much of the blame for rising prices on high consumer demand for goods, rather than service and supply chain issues.