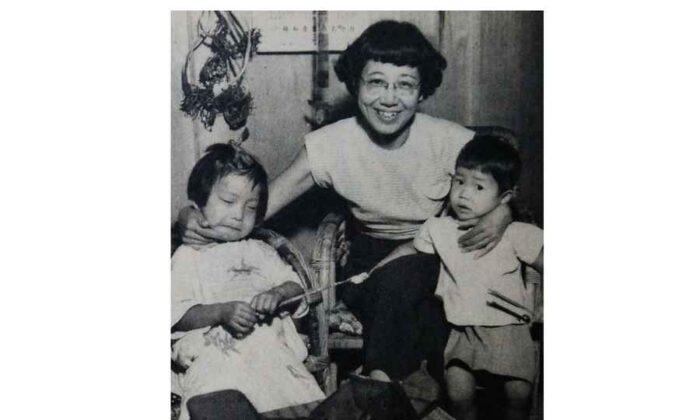 Tsuneko Sasamoto, Japan’s first female photojournalist, died on Aug. 15 at the age of 107. Sasamoto was the recipient of a Lifetime Achievement Award presented by The Lucie Awards, the Oscars of her chosen profession. The acclaimed photographer believed the secret to her long life was maintaining a positive outlook and paying attention to her daily diet.

Born in Tokyo in 1914, Sasamoto first aspired to become a painter, beginning her career as a part-time illustrator for a local newspaper. In 1937, a black-and-white film by Man Ray sparked her interest in photography. In 1940, during the China-Japan War, she joined the Photographic Society of Japan, officially becoming the country’s first female photojournalist.

During her long career, she covered a myriad of historical events and personalities.  She documented World War II, Japan during the post-war era, and photographed novelists, poets, and artists. Much of her work focused on women of the Meiji (1868-1912) and early Showa (1926-89) eras of Japan.

At the age of 97, Sasamoto wrote a book entitled “Hyakusai no fainda,” sharing the secrets of her longevity.

In the book, Sasamoto claimed eating meat and chocolate every day contributed to her long life. She said, “People always say that when you get older you should eat green vegetables and tofu, but that’s not true. You need protein and fat.” Sasamoto also minimized the intake of carbohydrates such as rice, and she believed living in this manner would lead to a longer life.

One habit she maintained for over 40 years was drinking a glass of red wine every evening. She believed this contributed to her longevity as well.

In addition to her dietary habits, Sasamoto said she had always been a hard worker and maintained a positive outlook on life. She admitted to being very curious about many things. “There is no age limit to learn what you want to learn. I went to school for interior design when I was 50 and have always tried to do better than my teachers at anything I’ve learned,” according to a translation from tomato-journal.

Sasamoto greatly enjoyed making her own food. She put all her energy into everything she did, including a daily journal in which she kept a record of her food, photography, design, fashion, and even her English studies.

In speaking about her youth, Sasamoto said she initially wanted to become a painter but later realized she couldn’t make a living as an artist. “I was told I couldn’t paint for a living, so I learned to tailor and later became a photojournalist.”

When Sasamoto was presented with awards or interviewed, she wore clothes and outfits she made herself. Her fashion designs, inspired by the ethnic costumes of Africa and Southeast Asia, were so striking that she was presented with a special design award when she turned 100.

The day after Sasamoto received Japan’s “Best Dresser” award, she fell at home and broke her femur and her arm. Rather than allow this unfortunate incident to spoil her demeanor, she breezed through recovery wearing scarves and clothing that made her feel alive and attractive.

Tsuneko Sasamoto’s life was colorful and filled with countless stories that seem impossible to others of her age. She never thought about her age. She said, “Age is just a number, not a reason to limit what you can do, so don’t live your life in a way that makes it boring and meaningless. People should not be lazy. The important thing is to keep a positive attitude towards life and never give up. Push yourself and stay alert so as to keep moving forward.”

Sasamoto was 102 when she was honored with the Lucie Awards Lifetime Achievement Award in 2016. In addition, the Japan Photographer’s Association honored her with the establishment of the Tsuneko Sasamoto Photography Award. She once said, “I have always done my work with gratitude for those who have helped me. I will continue to move forward in my own way under any circumstances.”

As she approached 100, Sasamoto continued to be active, publishing photography works and books.  In 2014, the year she became a centenarian, she organized two photo exhibits, entitled “Sasamoto Tsunako Centenarian’s Exhibition” and “The Women of 100 People.” She remained healthy and active in her 100s and was even interviewed by news media on her 107th birthday.