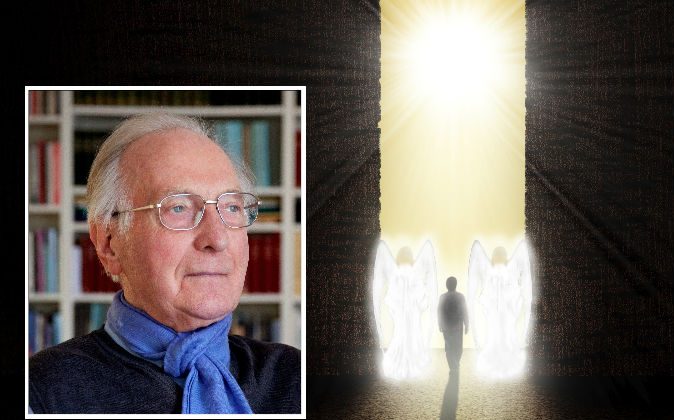 Dr. Erlendur Haraldsson, professor emeritus of psychology at the University of Iceland, asked approximately 700 physicians and nurses what they had heard from their patients concerning deathbed visions.

Many people, shortly before they died, reported seeing deceased friends or family members who said they were there to help them pass to the afterlife. The dying patients would often become happy to go and their fears dissipated as a result of the visions.

It was Haraldsson’s first major study. In 1977, his book “At the Hour of Death,” co-authored with Dr. Karlis Osis, was published. Now in his 80s, Haraldsson looks back on a long career of similar research—including studies on people who claim contact with the dead, past-life memories, and supernatural abilities.

“Technically speaking, they were or are hallucinations,” he said during a Skype video interview from his home in Iceland. He spoke calmly and cheerfully amid book-lined walls, with copies of his own books at hand to hold up to the camera as he discussed them with Epoch Times. “We define hallucinations as visions that are not seen by others. … So from a technical point-of-view, they are or may be hallucinations. But from another point-of-view … in some ways they were also realistic.”

The deathbed visions are realistic in that they involve real people the patient knew. The visions are also clear, rational, and surprisingly uniform.

In Haraldsson’s study, almost 500 terminally ill patients in the U.S. and India reported similar experiences of being offered help to the other side.

In Haraldsson’s study, almost 500 terminally ill patients in the United States and India reported similar experiences of being offered help to the other side. The experiences were the same independent of cultural influences and independent of the types of illnesses or medications administered.

Haraldsson referenced a 1926 book by Sir William Barrett titled “Deathbed Visions.” It was the first major publication on the topic, and it included some cases in which the dying people seemed to acquire knowledge they could not have come to by ordinary means.

The patients recognized spirits, unaware that these people had actually died. Barrett wrote: “These cases form, perhaps, one of the most cogent arguments for survival after death, as the evidential value and veridical (truth telling) character of these visions of the dying is greatly enhanced when the fact is undeniably established that the dying person was wholly ignorant of the decease of the person he or she so vividly sees.”

A more recent study confirmed some of Haraldsson’s findings. Neuropsychiatrist Peter Fenwick interviewed a large number of hospice caretakers in England. He found deathbed visions to be common and independent of factors (related to illness or medication) expected to cause hallucinations.

Haraldsson did a survey in Iceland in 1974, asking “Have you ever felt that you were in touch with someone who has died?”

“To my surprise, 31 percent of a large sample of 900 people answered ‘yes,'” he said. Others, including the late sociologist Andrew Greeley, asked similar questions and received similar results.

Surveys in Europe found about 25 percent of people reported contact with the dead.

He gave an example of an olfactory experience.

A woman was in the kitchen of her home in a small fishing village in southern Iceland. She thought she saw someone pass by the open kitchen door, but no one was there. A strong smell of alcohol arose.

When her husband came home he also noticed the strong smell and asked her if someone had been to visit. Neither of them could account for the smell.

They later found out that the man from whom they had recently bought the house had fallen into the sea and drowned at about the same time the woman experienced these strange sensations.

They later found out that the man from whom they had recently bought the house had fallen into the sea and drowned at about the same time the woman experienced these strange sensations.

The man was an alcoholic, and she attributed the sensations to his presence.

When Haraldsson was a student in Copenhagen, he had a ghostly encounter of his own in a room he rented from an elderly lady.

“Sometimes when I was going to sleep, I felt there was a man who came to the door and looked at me very observantly and keenly, like he was wondering ‘Who is this fellow?’ This happened several times.

“If this had happened to me in recent years, after I became interested in scientific study of this phenomenon, I would have asked the old lady about who had lived in that room before or if she was a widow—I didn’t even know that.” If he were able to identify anyone who may have been the ghost, he would have then asked to see a photo of him.

Haraldsson has had freedom to pursue these studies at the University of Iceland. As for the reactions of his colleagues: “Some were supportive, some didn’t like it, some were skeptical.”

“I just wish that there would be more scientists who would be interested in conducting studies of this kind,” he said. “Some people shy away from it … they think it will harm their reputation. But that hinders progress in this area.”