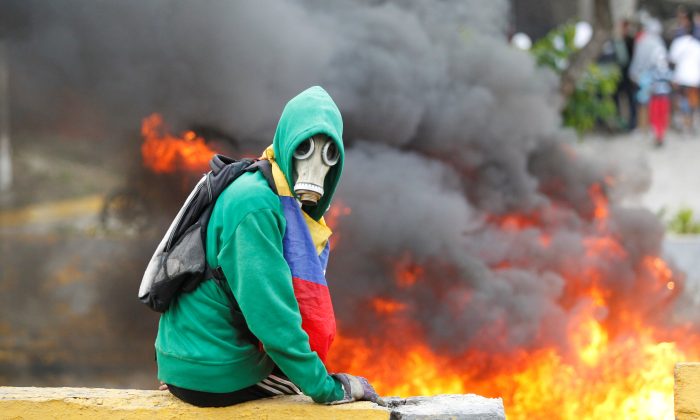 Demonstrator sits next to a fire barricade on a street during a rally against Venezuela's President Nicolas Maduro in Caracas, Venezuela on April 24, 2017. (REUTERS/Christian Veron
International

CARACAS—Two Venezuelan men died on Tuesday from gunshots at political demonstrations, bringing to 26 the number of fatalities around this month’s protests against Nicolas Maduro’s socialist government.

The state prosecutor’s office said Orlando Medina, 23, was gunned down on a street in western Lara state during a protest local media identified as anti-Maduro.

Luis Marquez, 52, died in the Andean state of Merida in the early morning after being shot on Monday at a pro-Maduro rally, state ombudsman Tarek Saab said.

In more than three weeks of chaos since Venezuela’s opposition launched street protests, 15 people have died in violence around demonstrations and 11 others in night-time lootings, the state prosecutor’s office said on Tuesday.

Political activists and Venezuelan media have reported more deaths, but those have not been confirmed.

The ruling Socialist Party accuses foes of seeking a violent coup with U.S. connivance, while the opposition says Maduro is a dictator repressing peaceful protest.

With near-daily demonstrations by both opponents and supporters of Maduro, there have been fatalities on both sides, as well as one National Guard sergeant killed during a protest.

“Any death hurts, government or opposition,” chief state prosecutor Luisa Ortega said in a speech. Four fatalities were adolescents and 437 people had also been injured.

The opposition’s main demands are for elections, the release of jailed activists and autonomy for the opposition-led legislature. But protests are also fueled by a crippling economic crisis in the oil-exporting nation of some 30 million people.

The unrest is Venezuela’s worst since 2014, when 43 people died in months of mayhem sparked by protests against Maduro, the 54-year-old successor to late leader Hugo Chavez.

Nearly 1,500 people have been arrested, with 801 still detained as of Tuesday, rights group Penal Forum said.

Trying to keep the pressure on Maduro, the opposition Democratic Unity coalition is planning a march on Wednesday toward downtown Caracas. Past attempts to reach that area have been blocked by security forces using teargas and rubber bullets against masked youths hurling stones and Molotov cocktails.

“The Venezuelan people will stay in the street until there is an election timetable, a humanitarian aid channel, freedom for political prisoners and independence for public institutions, especially the National Assembly,” said Ismael Garcia, a legislator with opposition party Justice First.

Thousands of red-shirted Maduro supporters marched in the state of Falcon on Tuesday, chanting pro-government slogans and denouncing the opposition for violence.

“They call themselves defenders of human rights but then they murder people. They’re the same as 2002,” Socialist Party No. 2 Diosdado Cabello told the crowd, referring to a short-lived coup against Chavez that year.