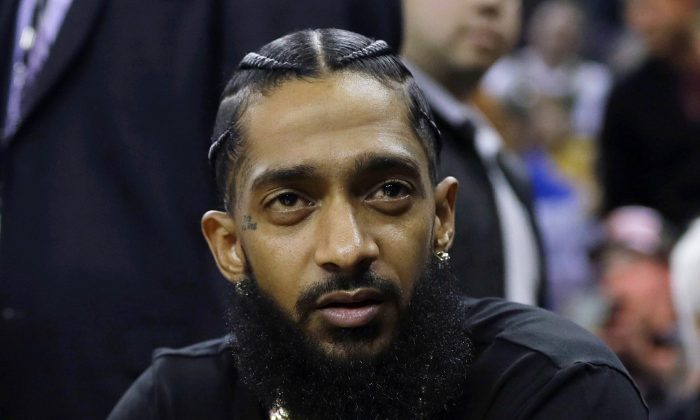 Events leading up to a horrific drive-by shooting of a controversial singer will be the subject of an internal police investigation, police confirmed on July 15.

An internal affairs investigation is underway into what led up to rapper Nipsey Hussle being shot dead in South Los Angeles on Mar 31. Hussle is also known as Ermias Ashgedom.

“While the initial indications pointed to a miscommunication, we have initiated an administrative investigation to ensure all policies and procedures were followed,” he said in an email obtained by the Associated Press (AP). “We will review all statements that have already been given, interview all of the individuals involved, and look for any potential body cam video that may have captured the interchange.”

The LAPD’s Office of the Inspector General also confirmed the internal affairs group is investigating a desk officer’s response at the 77th Street station.

LAPD spokesperson Captain Gisselle Espinoza told AP the matter is under administrative investigation and she was unable to release further details.

A New York Times report said the investigation would examine whether Hussle, 33, was secretly involved in a street gang. He had been working with the city to reduce gang-related crime.

As Los Angeles officials praised the rapper Nipsey Hussle after his death, he was being investigated. It reflects the city’s struggles with gangs.https://t.co/4lKQgb5FPa

Hussle previously admitted to being a former member of the Rollin’ 60s Crips, who was active in Los Angeles during the 1970s.

He also bought a South LA strip mall and opened a clothing store, The Marathon. He intended to redevelop it into new apartments, the New York Times reported. The project was celebrated as a key investment in the neighborhood and part of Hussle’s ambition to renew his childhood neighborhood and break the cycle of gang life for future generations.

However, the New York Times revealed Hussle employed some staff who had links to the gang or had already served time behind bars for gang-related offenses. Recent efforts by the city to work with gangs to softly reduce crime have allegedly raised the eyebrows of many police officers who believe a stricter approach is needed. One example of this was the 2016 meeting organized by rapper “The Game.”

“Nipsey Hussle did represent a model of anti-gentrification—keeping the neighborhood in the hands of the neighborhood but people in those areas all have pasts,” Jorja Leap, professor at the University of California Los Angeles, told the New York Times. “Someone can be a hero, and someone may also have a past. Neighborhoods can want zealously to have public safety and public gathering places but for better or worse that may or may not include gang members.”

@nytimes spoke with @UCLA @UCLASocWelfare‘s @JorjaLeap about the LAPD’s criminal probe of rapper Nipsey Hussle. “Someone can be a hero, someone may also have a past. Neighborhoods can want zealously to have public safety and public gathering places. But… https://t.co/7DaAl0gOl6

At a grand jury held on May 9 the woman who drove Eric Holder, suspected of fatally shooting Hussle, described the unusual exchange between the men on March 31.

She testified that Holder, 29, loaded a gun, told her he would be back and walked to the shopping center they had just pulled out of according to AP. She described the excitement of Hussle as he stood outside his Marathon clothing store and overheard Holder and Hussle talking about “snitching” from a nearby gas station.

She then heard two gunshots and Holder returned not long after—instructing her to drive, AP reported. She claimed she was unaware that Hussle was shot dead until later that same night because her car and license plate were on the news.

The woman and her mother turned themselves in at the police station the following morning. The front desk officer allegedly told them “don’t worry about it” and “don’t listen to the news,” according to a transcript obtained by AP.

The woman left the station and returned later to speak to detectives after her mother called the police again.

“That is true according to the desk officer that I spoke to about it,” Washington said at the trial according to AP.

Deputy District Attorney John McKinney explained the desk officer must have “missed a briefing in the chief’s press conference.”

Police arrested Holder two days later about 20 miles from the crime scene and have since charged him with murder. Officers believe the shooting was because of a personal dispute, according to AP.

Eric Holder is wanted for Homicide in the shooting of Nipsey Hussle. He was last seen in a 2016 white 4 door Chevy Cruze CA license plate 7RJD742. Anyone with information related to his whereabouts or this deadly shooting is urged to contact South Bureau Homicide at 323-786-5100 pic.twitter.com/3pX4fbezDs

The grand jury returned an indictment charging Holder with murder, attempted murder, and other felonies. He has pleaded not guilty.

Rubenstein does not believe there was any misconduct on the part of police because the woman allegedly reported someone had recorded a video of her car on television.

“She was not making herself clear of what she was doing,” he told AP.