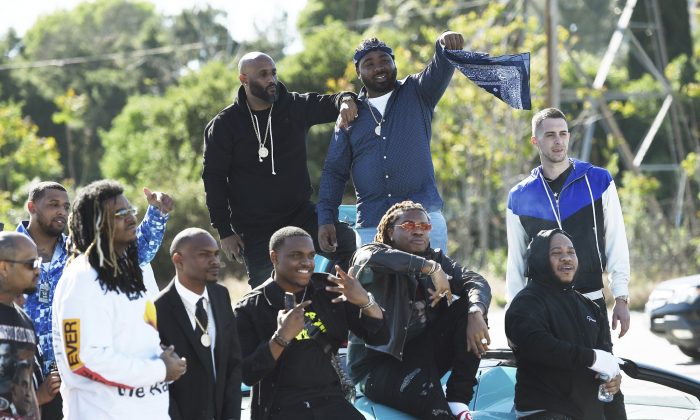 The Late American rapper Nipsey Hussle has provided for his children long after his death.

Hussle made sure Emani and Kross would never have to rely on other people for money, according to TMZ. The publication said the rapper was known to be business-savvy and owned the copyright on all his master recordings, as well as a clothing store, and several trust funds so that his family would never have to be dependent on others for their financial security.

The family has even refused help from retired National Football League star Reggie Bush, who set up a GoFundMe page to raise $100,000 for Emani and Kross.

“[Hussle] touched a lot of lives in a positive way. He wanted to make a difference in his community, and communities like it all around the world,” Bush said on his GoFundMe page, which has since been removed. “As a tribute to Nipsey, I would like to offer support to his children, and all funds from this GoFundMe will be transferred directly into a trust that was created solely for his legacy, his two children, Kross and Emani,” he tweeted, according to TMZ.

Man this Nipsey Hussle thing still has me messed up….😔

Patriots wideout Phillip Dorsett donated $1,000 to the campaign just an hour after it was announced. Bush had also donated $10,000 himself but the campaign was taken down well before its original deadline of April 19.

The family explained that Hussle would not want to accept money from other people as his family was already financially secure and it was simply not necessary.

The community response came in the wake of Hussle’s March 31 death outside his Marathon Clothing store in Park Mesa Heights, 10 miles southwest of downtown Los Angeles.

“On March 31, 2019 around 3:20 p.m. three male adults were standing in front of a business in a strip mall in the 3400 block of West Slauson Blvd,” the Los Angeles Police Department (LAPD) said in a tweet dated April 1. “The suspect walked up to the men and fired numerous shots at them. The victims were struck and fell to the ground.”

Eric Holder is wanted for Homicide in the shooting of Nipsey Hussle. He was last seen in a 2016 white 4 door Chevy Cruze CA license plate 7RJD742. Anyone with information related to his whereabouts or this deadly shooting is urged to contact South Bureau Homicide at 323-786-5100 pic.twitter.com/3pX4fbezDs

The suspect fled to a white 2016 Chevrolet Cruze waiting in a nearby alley and was driven away from the scene.

“The vehicle was driven by an unidentified female,” LAPD wrote. “Two victims were transported to local hospitals and one refused medical treatment at the scene. One victim, Ermias Asghedom, known as Nipsey Hussle died as a result of the gunshot wounds he sustained.”

Police identified the suspect as LA resident Eric Holder, 29, who has since been arrested. Holder has been charged with killing Hussle, and has pleaded not guilty. Police believe Holder and Hussle had several interactions on the day of the shooting due to a personal dispute.

“Eric Holder, the suspected killer of Nipsey Hussle, has been arrested and is in police custody,” LAPD said in a Twitter post dated April 2. “Thank you to both our community for the heightened awareness/vigilance, and our partners at Los Angeles County Sheriff’s Department headquarters.”

Hussle’s family and friends gathered at Forest Lawn-Hollywood Hills on the afternoon of April 12 for a private funeral. Earlier in the day, the rapper had also been officially honored by the city.

The Los Angeles City Council voted unanimously to rename the intersection of Crenshaw Boulevard and Slauson Avenue to Nipsey Hussle Square. The area is home to Hussle’s clothing store and the site of his attack.

“His work and impact will never be forgotten and I am grateful to do a small part to ensure the marathon continues,” Councilman Marqueece Harris-Dawson (D) said in a statement published by the Associated Press.

Hussle recently purchased the strip mall where The Marathon Clothing is located and planned to redevelop it as part of his ambition to remake his childhood neighborhood and break the cycle of gang life for future generations.