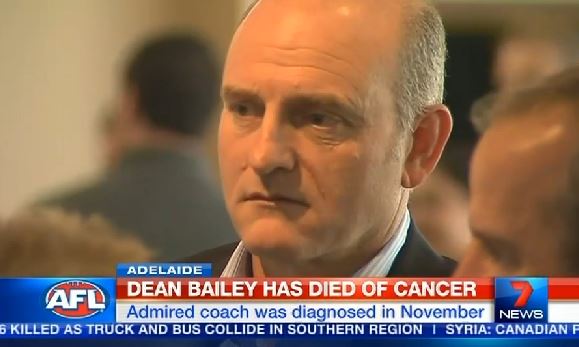 He was diagnosed with the cancer in December.

“Our thoughts and prayers are with Dean’s wife, Caron and children Darcy and Mitchell,” said Crows CEO Steven Trigg in a statement.

“Few understood the game of football better than Dean. He often told how he gained most pleasure from teaching and helping young men become better players and more importantly, better people.

“Dean’s dry sense of humor also provided many priceless moments. His influence stretches far beyond the Adelaide Football Club, given his involvement in the game across three states.”

Bailey’s career began at Essendon in 1986, after he was recruited from North Ringwood, reported AAP. He spent time with Glenelg and Mt. Gravatt as well.