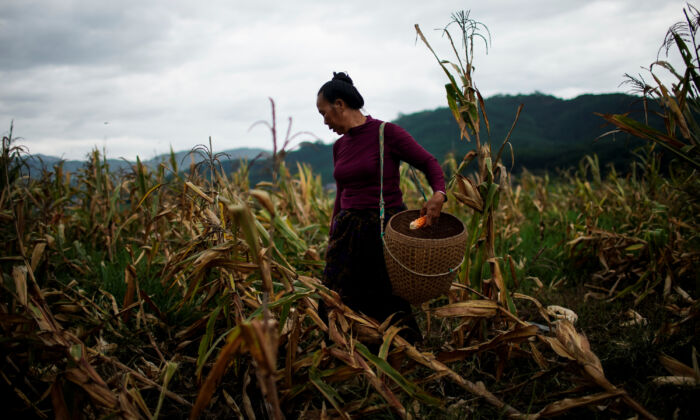 Food shortages in China have scared the ruling communist regime, which announced on July 13 that two officials responsible for the nation’s food security are under investigation.

On July 9, leader Xi Jinping ordered the regime to make food supply concerns a national security issue while recent data has shown that China has been increasing grain imports which has pushed up global prices, impacting the food security of many poor regions.

“Forty-five countries, including 34 in Africa, nine in Asia, and two in Latin America and the Caribbean, are in need of external assistance for food,” reported the United Nation’s Food and Agriculture Organization (FAO) on July 8.

As for China, its food shortage issues may worsen in the near future with heavy rain recently causing flood damage to farming areas in more than ten provinces including southwestern Sichuan and central Henan.

Summer is a critical period for Chinese agriculture as the crops need solid growth in the lead up to harvesting in autumn. The subsequent yield of the autumn harvest contributes to three fourths of China’s grains.

Starting in July, Chinese state-run media have been quoting officials who claim that the upcoming harvest could feed China’s 1.4 billion people. Based on past experiences, such propaganda efforts typically have many Chinese presuming the opposite will occur and that the harvest will instead be poor.

While China has been purchasing grains from the global market it has been importing a large number of seeds (for potato, broccoli, corn, soybean etc) and breeding animals (pigs, chickens etc).

China’s customs said July 13 that the country imported 84.36 million metric tons of grain in the first six months of 2021 valued at US$36 billion, which is 67 percent more than what China spent on imported grains in the first half of last year.

FAO reported on July 8 that China’s grain purchases—including wheat, rice, corn, barley, sorghum and soybeans—will cause global food prices to rise for the next 12 months.

Xi Jinping reportedly spoke with senior Chinese officials about his food supply concerns during a meeting with the Central Committee for Comprehensively Deepening Reform on July 9.

“[Food security is] the foreseeable and unforeseen stormy waves that we will face,” Xi said. “This is a tough and protracted battle that we are required to maintain [a] tenacious fighting spirit and strategic determination.”

Xi said seeds and breeding animals are the key to modern agriculture, but China is reliant  on imports in these areas. Although other countries won’t ban such exports to China, Xi and his regime are concerned that they could be used as leverage by other nations.

“[We must] raise the importance of seed and breeding animal security, to consider them as strategic national security issues,” Xi ordered. “We must integrate the resources [all over the country] to solve the toughest problems.”

Xi said the development of an agricultural cultivating center producing seeds in topical Hainan Province needed to be sped up.

“Food security is more important than any other time in the past [for China],” Xi said. “It’s more urgent than ever to ensure that we own the seeds and breeding animals.”

On July 4, state-run Xinhua published an article, which started with a quote from Xi: “All Chinese people in my generation have memories that we didn’t have food to eat, or didn’t have enough food to eat.”

The article urged all Chinese to save food and to develop China’s agriculture.

The regime announced on July 13 that Xu Ming, a retired deputy director of the Chinese State Administration of Grain, was under investigation.

“Xu is suspected of seriously violating discipline and laws, and is under investigation and inspection,” the regime’s anti-corruption watchdog, the Central Commission for Discipline Inspection, said in its announcement.

Xu, 63, worked as the deputy director of the government agency—which is in charge of the strategic reserves of corn, wheat, rice, oilseeds, natural gas and petroleum—from March 2013 to March 2018 when he retired.

In another case, the Heilongjiang Provincial Commission for Discipline Inspection announced on Tuesday that Shi Zhonghua, former chairman and party leader of state-run Beidahuang Grain Group, was under investigation because he “suspected of seriously violating discipline and laws.”

Shi, 59, was chairman and party boss of the group, which is China’s largest agricultural commodity grain production base, from 2013 to 2019, and he was the president of the group from 2009 to 2013.  It’s unclear why he was dismissed from the position in April 2019.