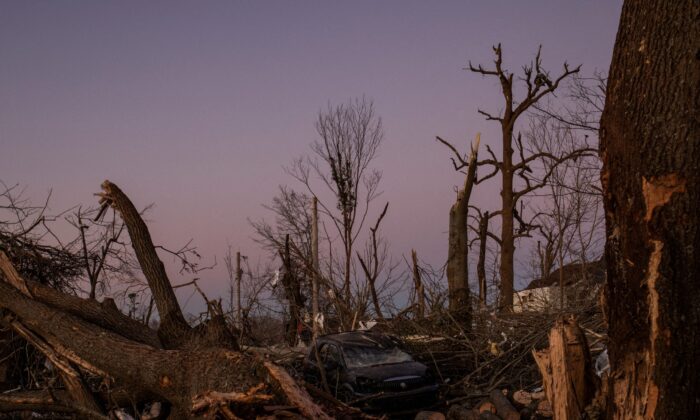 A destroyed vehicle sits in the aftermath of a tornado in Mayfield, Ky, on Dec. 13, 2021. (Adrees Latif/Reuters)
Economy

Deadly Tornadoes to Cost Insurers up to $5 Billion

Insured losses from the swarm of tornadoes and severe convective storms that caused destruction in parts of the country this month could amount up to $5 billion, industry experts said on Tuesday.

Catastrophe modeling firm Karen Clark & Company said it expects insured losses of about $3 billion from tornadoes that tore a 200-mile path through the six states in the U.S. Midwest and South, demolishing homes, leveling businesses, and setting off a scramble to find survivors beneath the rubble.

The barrage of tornadoes killed at least 74 people in Kentucky, officials said on Monday.

Credit rating agency Fitch said insured losses could rise to $5 billion, rivaling the U.S. Midwest derecho event in August last year, but less than Winter Storm Uri and Hurricane Ida, both of which saw losses of $15 billion and $40 billion respectively.

Fitch said it was unusual to have this type of weather-driven event in December, which is historically the least costly month of the year for U.S. convective storm insured losses.

“The tornadoes will likely drive insurance industry natural catastrophe losses to the largest annual total in the U.S. since the 2017 record year (approximately $130 billion),” it added.

This will add to reinsurers’ push for rate hikes at the January 2022 pricing renewals and beyond as they absorb losses from another unusual weather event and react to concerns about the negative impact of climate change, Fitch said.

The powerful twisters, which weather forecasters say are unusual in cooler months, also destroyed a candle factory and the fire and police stations in a small town in Kentucky, ripped through a nursing home in neighboring Missouri, and killed at least six workers at an Amazon warehouse in Illinois.